Another of Mr. Morgan's funny ideas

Another of Mr. Morgan's funny ideas 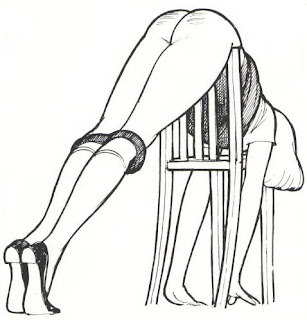 Violet was seventeen, born pretty and born lucky. In eight months at her new school Violet had never had the cane - until today. She knew only what she'd been told by some of the other girls, and the thing that had stuck in her mind was that getting caned hurt! They had all been most emphatic about that! Of the ritual a girl had to go through, down here in Mr. Morgan's hidey-hole next to the boiler room, she knew nothing. Wide-eyed and trembling she had simply followed the Deputy Head's directions, and was now standing semi-naked, or at least that's how it felt, in blouse and tie and knickers and socks and shoes and a warm, pink blush. Her hands were clasped on top of her head, which lifted her breasts so that they pushed out and let her see the pertness of her nipples resenting the closeness of the cotton blouse confining them. There was little she could do to stop her tits making such a display of themselves, and anyway she was rather more conscious of the exhibition her bottom was undoubtedly making of itself behind. The smugness of her knickers seemed to have pulled into the cleft of her buttocks, which were, as she was only to well aware, to be the focus of attention in the very near future. She pressed her thighs close together and shivered dismally.

Mr. Morgan, unlike young Violet, knew all about canes and caning and soft vulnerable bottoms and how to make even a four-stroke punishment drag out into a quarter of an hour's misery for a girl unlucky enough to have fallen foul of the school's rule book. And he knew too how to take the fullest advantage of his privileged position as Deputy Headmaster.

Violet's bum, plumply confined, more or less, by the green school knickers, glowed with a warm pinkness which was evident around the chubby under-curves which her pants were too skimpy, or too undersized, to cover. The pinkness in her bum-cheeks, matching the rosiness of her apple-cheeked face, had been smacked into vibrant colourfulness some five minutes before on the long walk from the library, where she had been required to report, to the room in which she now miserably awaited the caning she had been promised. Violet's progress, skirt hitched up to her waist and held clear of her bum with both hands, knickered bottom swerving this way and that as Mr. Morgan had slapped her every third or fourth step from where he had taken up station half a pace behind and off to one side, had taken her past 4B, waiting outside the Physics Lab and goggle-eyed at the sight, past Miss Duncan, the school secretary, who had glared at Mr. Morgan in disapproval, past Mr. Rodgers, the caretaker, who had gazed with unfeeling amusement at Violet's predicament, and past a rather disconcerted window cleaner, who had followed Violet's gasping, teetering, bottom-bouncing progress with obvious disbelief. The clank of an overturned bucket as the two had passed had not interrupted Mr. Morgan's concentration at all. Violet's smarting bum had been thoroughly tenderised by the time the door to Mr. Morgan's room had shut behind them both.

Her skirt had been declared a hindrance to the forthcoming ritual, and now lay folded neatly on a chair. The green knickers, though they flattered the firm rotundity of the girl's buttocks, were now also said to be redundant. With the knack of frequent practise, Mr. Morgan slipped a finger into the waistband of Violet's pants at either hip and turned them inside-out down over the two pert cheeks, completing the operation with a slap which startled a yelp from the panicky girl and made her squirm her hips lewdly while her knickers were arranged halfway down her thighs. Crouching behind her to ensure the neatness of his knicker-arranging, the Deputy Head could feel the heat from Violet's freshly-spanked buttocks wafting against his face. Perhaps it was churlish of him to smile at this evidence of her discomfort, but smile he did, and broadly.

Hands still on her head, for she had been told that on no account was she to lower them, and with her knickers no longer keeping company with her bottom, Violet began to appreciate fully the iminence of her promised caning. In a daze of anguished apprehension she felt her blouse being tucked up high under her breasts and knotted in front so that it shouldn't fall down. Mr. Morgan's hands playfully explored the tender plumpness of her bared bottom and patted her cheeks with what was undoubtedly relish at the prospect of applying a cane to them. This made her feel not one whit happier, and indeed produced a pout in her lower lip which pressaged a deluge of tears should any further indignities be in store for her.

Violet having been properly prepared, Mr. Morgan now edged the girl forward, feet shuffling in indecision since she didn't understand what was required of her, and pointing with the toe of his shoe he told her to place one foot on that floor tile, and the other on that tile, and not to move her feet off these tiles until she should be given permission. The girl did exactly as she was told, finding that to do so she had to stand with her feet some twenty inches apart. The scuffed and darkened patina on each of these tiles held no significance for her. She knew only that this was one step nearer to the moment when her naked bottom was going to get it's very first taste of the cane, and she shuddered at the thought.

Mr. Morgan, not one to hurry on to the port while his trifle still had it's cherry on top, took his time in his tactile reappraisal of Violet's roseate bottom now that she was in the proper position for what he had in mind. The parting of her legs allowed each buttock in turn to be cupped fully in the palm, bounced experimentally, squeezed gently in measuring the resilience of these most canable cheeks, and patted with a 'platt, platt, platt' which made the nervous girl pout even more petulantly. The reconnaissance completed, the cane cupboard was unlocked and several canes were ritualistically swished with Violet's eyes widening with every wicked swipe at the unresisting air. Though her feet still kept to their assigned positions, the girl's knees bent with an inward tendency until the insides of her thighs were all but touching again, giving her a knock-kneed look which, along with the pigeon-toed alignment of her feet made her seem for all the world like a little girl about to wet her knickers, and in truth this is a fairly accurate description of the way young Violet felt, too.

The cane-swishing over with, Mr. Morgan selected a short, straight cane, not particularly thick; the one which in fact he had intended to use all along. Violet's inelegant posture was corrected at once with a flick of the stick across the backs of her thighs.

"Up straight, if you please Miss!"

"Ooow -" Violet's hands dropped down to clasp her legs. Another flick, a sharp command, and her hands were fluttering in indecision at waist level, the wretched girl torn between the need to clutch at the stinging cane marks and the not-to-be-ignored instruction to 'Get your hands back on your head, girl!' Encouraged by a third sharp stroke across her thighs, Violet found herself having to obey the command, though one hand hovered momentarily next to her left ear as if to invite another whack from the cane.

But now, the three cane marks brightening around her thighs, Violet was managing to present herself in the way she had been intended to do. Legs straightened, hands up on her head lifting her breasts perkily, bare bottom trembling rosily and pushing itself saucily out behind in seeming acceptance of the inevitability of it's fate.

With a careful, almost caressing twitch of the cane against the girl's bottom, Mr. Morgan persuaded the nervous buttocks to push themselves backwards a little more invitingly, a quiet word being all that was needed now. Violet thrust her bum out in mute obedience and nipped her lip between her teeth as she struggled against the tears.

All now being ready, Mr. Morgan placed himself alongside his pupil, his body barely an inch away from the girl's hip, cane teasing the firm cheeks - and free hand touching, though only just, the smooth, warm skin of her belly, a finger ruffling the curls at the top of her mound. He spoke in a tone which was a mixture of quiet authority and friendly encouragement.

"Now then my dear, this cheeky little bottom of yours is going to hold itself just so -" the cane tapped the bared buttocks with a soft 'thwitt, thwitt' - "isn't it, eh?'

Violet stumbled out a frantic "Yessir" and Mr. Morgan watched the twitch of her spanked buttocks as the cane bounced itself off the crown of her cheeks several more times. With just a little more wrist he flicked a stingier stroke up under the plumpness.

"Oooh -" Violet snatched away an inch or so. The cane flicked again.

"Now, now -" The hand on her belly prevented any further forward movement. The tip of a finger slipped down the curve of Violet's curly-haired pubis. The cane trembled in his hand, 'swhicked' across both saucy cheeks together. Violet's bum jerked away from the ting -.

"Come along my girl -" The fingertip coaxed the panting girl back into position, and slid down under the swell of her mound.

Another stroke, not too hard.

Violet's bum swerved away, the fingers edged her back again. The cane stung once more. Violet squirmed and gasped and snatched forward away from the cane - onto the fingers. She pulled away from the intrusion - her bum thrust itself backwards.

Violet wriggled back, bottom pleading for another one. Whack!

Slowly she learned. If she squirmed back away from the fingers her bum couldn't help but thrust itself out - for the cane. The more she stuck it out, the harder it got caned. The thing was not to stick it out. If she resisted the urge to slide backwards away from the fingers - well, she still got caned. But not so hard. Enough to make her wriggle. To squirm a bit. Slowly she caught on to that too. The cane flicked - not too hard. Violet wriggled. The cane hovered. Violet stopped squirming. Swhitt! Another stroke.

Violet wriggled quite a lot!

A few tears were inevitable. The eventual outcome was inevitable. Buckling at the knees, hips snatching back and forth as her toasted bum got another half-dozen swishes for good measure, Violet shuddered to the peak of her very first orgasm at the instigation of a man.

Mr. Morgan put the cane away at last. Legs still a straddle, knickers tight-stretched between her thighs, Violet kept her hands on her head and felt the blush flooding hotly into her cheeks.

"There we are -" Mr. Morgan patted Violet's simmering buttocks. "- one properly disciplined young lady. You can pell 'em up now and run along."

Gratefully Violet dragged her knickers up over her bottom.

"And you'll know what to expect next time, eh?"