One more story about old Mr. Dupont - from Blushes.

'What you need, my girl, is a little re-education in the art of applying yourself whole-heartedly to your work. Don't you agree, Rosalind?'

'Yes, Daddy.' Rosalind fumbled surreptitiously to her knickers, lodged between her knees where they had slithered as a result of her struggles across his lap. She had been trying to find a convenient moment to retrieve them, but each time she had stooped forward so that she could reach he had fixed her with that calculating stare he had that could freeze both action and intent, so menacing was the gleam in his eyes. Again he intercepted her attempted retrieval of that insubstantial token of a girl's modesty, and hesitantly Rosalind straightened up, blanching and feeling her bottom tremble nervously.

'What's the matter, bottom getting chilly?'

'N-no, Daddy.' She avoided the trap by some intuitive realisation that chilly bottoms might be ones which needed warming again. She stood up straight, still clutching her skirt to her waist, embarrassed by the feel of her nakedness from her belly-button down. On her stepfather's desk the letter from school which had precipitated all this awfulness mocked her pale face and spank-reddened bottom, and made a nonsense of her grown up pretensions. Her father paced the room which he liked to call the library.

'As I was saying, Rosalind; a little re-education is what you need. It might teach you to do what you're told, when you're told to do it. I think you said you agreed with me on that, didn't you?'

'Um - y-yes, Daddy.' She wasn't at all sure that she did, actually, but saying so would have been rash indeed. Her knickers slipped suddenly from her knees and plopped around her ankles; further away than ever. She shuffled her feet together, thinking that now it might be best simply to step out of them altogether. He turned his back again, glancing out of the window at the gardener and his lad weeding a flower bed, and Rosalind seized the moment and stooped to scoop up her pants. She was treated to another glare as her father turned back towards her; guiltily she screwed up her knickers in one hand and slipped that hand behind her back. Tentatively she let her skirt slide it's pleats down in front of her tummy, the movement not unobserved but at least uncommented.

'Well then - do you remember Mr. Dupont? Used to teach you the piano?' He watched the last riffle of her pubic hair disappear beneath the dubiously lowered skirt, his expression betraying an uncharacteristic hint of amusement.

'I telephoned him this morning. Do you know what I did that for?'

'N-no.' Fiddling with her knickers behind her back, Rosalind suddenly felt them slip from her fingers and brush the backs of her legs as they fell to the floor. She flushed in an instant at the chuckle that greeted this unfortunate happening. 'Um - he must be very old by now.' And hopefully retired. Please - let him be retired. Even better - a wicked thought, but almost forgivable - perhaps dead? Demised, passed on - did it sound better that way? 'H-how is he?'

'In the rudest of good health, I understand.'

Rudest of good health! Naturally. If he were still 'undemised,' he of all people would be in 'rude' good health. Rosalind squatted and recovered her pants, still flushed. 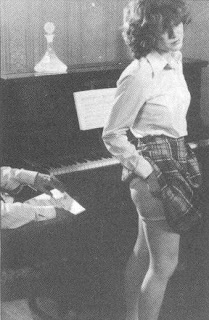 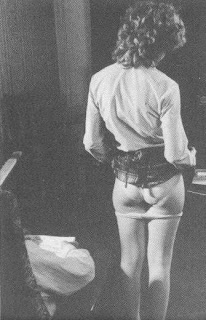 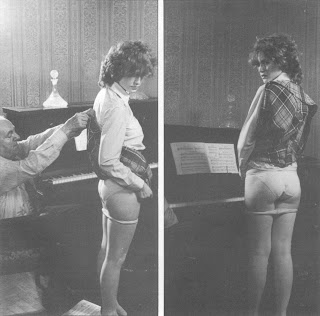 'I asked him two things. I asked him, first of all, whether he thought a sixteen year old was too old to have her bottom caned.' The amused look passed across his face again as Rosalind's cheeks lost their rosiness as quickly as they had gained it. 'Do you know what he said? He said he thought not. Apparently he has a girl of seventeen, still a regular pupil. He says she responds to the cane just as well as ever. Linda Chandler? Did you ever meet her?'

'Y-yes.' Poor Linda. High days and holidays, half-terms and long weekends - her mother was obsessed with trying to get her to the Royal College of Music. Seventeen, and still having her knickers taken down by the vulgar man! Rosalind swallowed noisily; this wasn't sounding too good for her own bottom's well-being!

'Do you know what else I asked him?'

'No -.' But she could guess! How awful, if she had to go back to Mr. Dupont! She could feel her bum flinching at the very thought of being up on that piano stool again.

'I asked if he could accommodate another pupil this weekend. One whose practice had not been kept up - he took a rather narrow view of that, by the way - and one whose general conduct in the matter of education in general left much to be desired.'

But he said no. Please - let him have said no!

'He said he was rather busy, but - as it was an old pupil, he would make time for her.' He smiled unconvincingly. 'For you, that is.'

Linda's frantic sobbing, though muffled by the closed door, carried it's dismal message that nothing much had changed since Rosalind had last been there. She pressed her knees together and tugged her skirt down over them in an involuntary gesture of concealment, knowing that there wasn't going to be much chance to conceal anything once she was in that other room at the piano! It was almost ten o'clock on Saturday morning, and there was a two hour lesson in front of her even before lunch. She bit her nails and felt the butterflies in her tummy and tried not to picture what was happening in the music room.

Linda was there for yet another weekend like most weekends. An hour's practice when she arrived on Friday night, three lessons on Saturday and two on Sunday, when her mother would collect her at about half past five. Mr. Dupont sat comfortably beside the piano stool and piloted the girl through a complicated piece which she executed more or less perfectly. She reached the end and stopped with her fingers still poised above the keys; her tender-looking buttocks flinched in rueful anticipation of another stroke from the strap which lazed across her teacher's knee. There seemed no reason to disappoint her. The strap's leather tongue licked smartly around the obediently out-thrust bum-cheeks, making them quiver and jerk forward on the seat, yet by the time the strap had been returned to it's place of readiness the girl's bottom was pushing itself perkily out behind again, as if already waiting for the next one.

'Yes sir.' Though she was still half sobbing, Linda's fingers went instantly through the ritual of the piece which she had played every Saturday morning for the last four visits, knowing it so well she scarcely needed to look at the music. 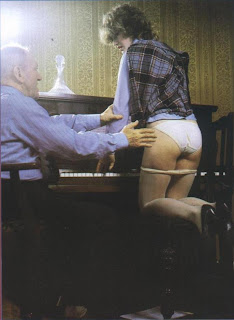 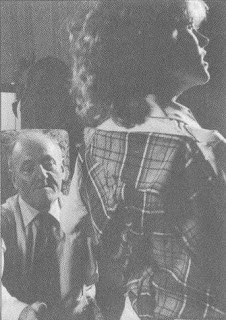 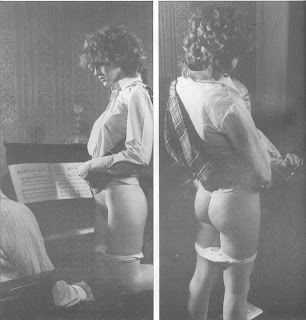 Mr. Dupont knew the girl so well that he hardly needed to look to know that the strap had slightly missed the fullness of the cheek he had aimed for and had glanced off the edge of the stool as it had been brought up from below. Her reaction had been a little too subdued, considering she had been at the stool for an hour, and the strap had been at her plump bottom for just as long. He knew her well enough too, to be confident that when he told her to slip an inch or so backwards so that the same thing shouldn't happen next time, she would know exactly why she was told to do it, and that as soon as she had the strap would arrive with full force to do the job it had only half done the last time; yet she would do it without question, obedient to the letter.

Linda's rebellious nature hadn't always allowed him to predict her behaviour with such accuracy, she had once been as chary of the spanking hand or strap or cane as any girl in her position would have been: several confrontations, however, together with a number of interviews with her mother, had settled the girl down into the kind of obedience required of her. He no longer found himself having to explain anything to Mrs. Chandler - Linda knew that whatever complaint she might be moved to make to her would simply be submerged in all the persuasive effort her teacher had devoted to winning her mother's confidence in him, so that no he could do no wrong.

Linda finished the piece and sat looking nervously over her shoulder, anticipating the strap's sting up under her bottom. It arrived, this time accurately aimed, and she lifted an inch or so from the stool as her legs tautened automatically. Her breasts bounced heavily under her pyjama top and she sucked in a gasp of patient anguish.

'Yes sir.' Once more her fingers found the keys and she began.

Linda's pyjama bottoms had, as ever, been confiscated as soon as she had arrived, along with her knickers, her skirt, her jeans. Nakedness from the waist down was de rigeur for Linda whenever she came to Mr. Dupont's house, and she no more told her mother about that than she told her about the substitution of a system of 'forfeits' in place of the strap at Saturday evening piano lessons, the penalties to be paid later, in her bedroom. Mr. Dupont had hardly considered it necessary for her to get dressed for this morning's lesson, since it had commenced straight after breakfast and anyway, getting 'dressed' would have borne only token significance, since it would only have been a matter of swopping her pyjama top for a blouse; ankle socks and sandals being the only other items of clothing allowed. 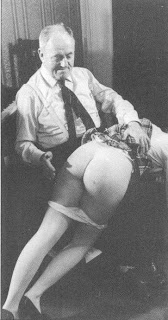 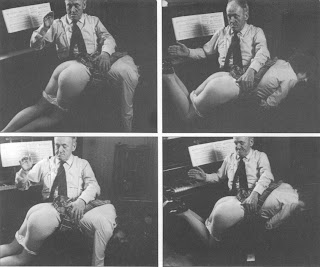 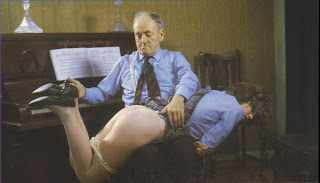 Once again Linda finished the piece. Whack! The strap made her squirm again, but then the relief of being told she could go eased the smart. Linda scurried to the door and upstairs; Rosalind, wiggling on her chair in dread anticipation, heard her name called. A bundle of anxieties, she tip-toed across the hall with a last pointless hitch at her knickers through her skirt as she went, and then there it was, the piano just as it had always been, the stool on which her spank-tenderised bottom had perched for endless hours, and Mr. Dupont, hardly any different from the last time she'd seen him. On the top of the piano a token that said things hadn't changed at all; two safety pins, which he would use to pin up her skirt so that nothing would interfere with his access to her bottom. Feeling just the same as she'd always done every time before, Rosalind went in and closed the door behind her.
Posted by Dmitry at 04:07