Three ducks in echelon angle their stiff-winged flight up a chimney breast; a silver framed photograph looks blankly and obliquely across a small suburban sitting room; a television newscaster delivers his uninspiring account of the days happenings – silently, because the sound knob on the television has been turned down – and he smiles a half-convincing goodnight into two million homes. Ignored by these silent witnesses, a frantically sobbing girl blubbers pathetic pleas for "n-n-no more, please – please, Uncle – ooogh!" 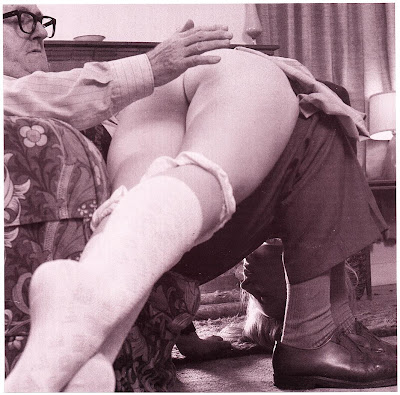 In a fender-guarded hearth, a knight in brazen armour watches po-faced and clutches his fire-tending implements, unmoved by the tearful girl's plight as she tosses her head back an instant after a solid-sounding slap rings loud in the curtained room. Blonde hair dashes across flaming cheeks which have been heated as much by breathlessness and humiliation as by proximity to the hearth and its glowing coals; "I don't think you've had quite enough yet!"

The final word coincides with another firm slap and the girl snatches forward across her guardian's lap – whom she calls "uncle" because he prefers her to – impelled by the sudden thrusting of her toes against the floor.

Halfway down the girl's scissoring thighs, a pair of navy school knickers cling to her legs. Rucking and then stretching as she kicks in near panic; "I'll decide" – Another stinging spank, "– when this naughty little bottom's –" another one, just as hard – "had what it needs!"

The girl's flinching, jerking bumcheeks shiver from the impact of what might be their eightieth or ninetieth smack; twenty or more bum-reddening spanks later those crimson blotched buttocks are squirming uncontrollably and her sobs and pleadings have become squeals of helpless anguish; "Get up!"

A knee thuds on the floor; black school shoes scuff their toes against the carpet and groping fingers clutch at the drooping navy knickers. The girl kneels between her uncle's knees with tears rolling down her cheeks; her buttocks still quiver as she drags her pants up, hoping against hope that a spanking is all the punishment she's to be given this evening. Her uncle still holds her green tartan skirt up to her waist; his words dash that forlorn hope;

"Leave them where they are, Rachel!"

"Oooo!" the knickers 'sloosh' down her legs again. Practised fingers slip the fastening on the skirt's waistband and it unfolds from around her hips. Pale maiden-hair catches the light; Rachel squeezes her plump, damask-skinned thighs together and licks unconsciously at her lips. "Come on then!"

"Please –" a sharp and unexpected slap stings the side of her leg. "Ooow!" The naked buttocks tweak together then bob apart; slender, fumbling fingers yank at a blouse button whilst other hands loosen the tie at her neck. The knot is pulled loose even as Rachel is tugging at the next button up. The narrow end of the tie flicks her cheek as the knot comes undone; the tie 'whisks' from under her collar and another slap whacks against the same thigh.

Rachel tugs at the third button while a small pot of enormous significance is taken down from the mantel-piece.

The third button comes undone and instantly the one next above it pulls out from its buttonhole too. With a robust bounce Rachel's tits spring into view as the "helping hands" wangle the last button free. "Knickers right down!"

The girl pushes her pants down to knee level and they rest their thick navy folds across her calves. The blouse is yanked up over her head, her hands having to go with it, trapped by the still-fastened cuff buttons. "Stupid!"

One button is unfastened but the other doesn't survive the impatience of Rachel's uncle's fiddling; it drops unheeded to the carpet and the girl's hands float up towards her head, which is where hands have to be when they are not to be allowed to interfere with further proceedings. "Turn around!"

"Please – please!" But she turns, stumping round on her knees, catching another bum-jiggling smack on her left cheek as she comes sideways on. "Over –".

"Please –!" with her knees close together, Rachel bends forward until her elbows are touching the floor; her hands are still on her head, her tender-looking bottom sticks up helplessly. But not enough – "Come on Rachel – do it properly!"

She hollows her back; her spanked bottom tautens into a tighter bent-over curve and juts up under his very nose. Rachel's tears dampened cheeks flame with the natural result of this last humiliation. Fingers press sideways at her inside thighs; she swallows a nervous gulp and inches her knees as far apart as they will go, her knickers stretching taut between her legs. The faintly heard sound of the top being unscrewed from the pot makes the girl gulp again: "Oh please – please don't –!"

Her eyes widen suddenly; she breaths in at the touch of the expected yet still startling chill; "Ooooh-no-no-no!" Then again; she screws up her eyes and gasps. When she opens them again her cheeks are blushing almost as vibrantly crimson as is her still-smarting bottom. "Turn around!"

She straightens up from the floor and bumps around on her knees, her hands still on her head, her breasts wobbling as she turns, their nipples stiffening all at once without apparent reason. He is crinkling a plastic-enveloped packet.

"Open". She puts out her tongue for the small, insignificant seeming pill; the taste of the jelly is still on his fingers. She crunches the pill between her teeth and pulls a wry face at the tang which it and the jelly leave in her mouth.

"You're supposed to swallow it, not bite it." The packet rustles again. "You'd better have another one". For once he is patient; she's still learning.

She opens her mouth again and gulps and swallows until he's sure it's gone down. "Right, you can get up."

Rachel gets to her feet, inelegantly; her knickers slip slowly down her calves. Every stitch of clothing she has on is now at ankle level or lower; knickers, socks, shoes. He holds out his hand for her knickers, not needing to tell her. She lifts one foot then the other; the pants catch for an instant on the buckle of her shoe before she can surrender them. "Upstairs, my girl! End of your bed, pillows under your tummy, face down. Shoo!"

Rachel "shoos", her bum wagging behind her, buttocks hot and bothered-looking. She looks back nervously from the doorway and then scampers upstairs.

By the time she is settling herself across the end of her high-standing bed, Rachel's cheeks are wet again with fresh tears. She stuffs the pillows tightly under her tummy and stretches her legs apart until she can feel either edge of the rug at the bottom of her bed under the toe of each shoe. Footsteps sound on the stairs. She spreads her feet wider until the muscles in her thighs and calves are taut. She hollows her back and tilts her bottom up so that she'll be as humiliatingly positioned as possible when he comes through the door ready to be given the rest of her "punishment" without further fuss. Against all the omens she hopes that he'll do no more than make her disgrace herself on the tips of his tantalising fingers; the facts are, though, that since her sixteenth birthday these "end of the bed" punishments have been somewhat stiffer. Rachel crosses her fingers when she'd much rather be allowed to cross her legs and holds her breath in case that was the sound of an unzipping fly –
Posted by Dmitry at 08:03