'Well Debbie, here we are again. I'm sorry about this, but it really is your own fault.' The avuncular figure at the wheel of the car did not look in the least bit sorry – but the young girl by his side did.

'Please, Dad, don't make me go in.' He wasn't actually her Dad (though she always called him that) just a foster-parent. 'You know what she does to me.'

'Of course I know what she does to you. That's why I bring you here. It's what was arranged, so that's how it's got to be...'

'Oh Dad!' Such a pleading, pouting look but it left him unmoved.

'Don't think we've missed a single month this year yet, have we?'

'No...' The girl shook her head miserably.

'It's all down to your bad behaviour. You've got to learn, Debbie. Otherwise I shall simply have to keep on bringing you here. Now... off you go. I'll wait, as usual.' It was a lovely summer's day and the sun-roof of the car was open. So, also, he saw was one of the study windows where Debbie would shortly have to present herself. That was interesting. It was some time since he'd been able to hear the girl getting it. He had used to listen outside the door of Mildred's room when Debbie was receiving a whacking from her foster-mother. That, of course, was before Mildred had left him to set up this Private School of hers. That parting had been reasonably amicable, suiting both sides.

'Don't forget, John, the girl will still need discipline. I suggest you bring her along to me once a month. Say, every last week-end. With a little report from you.' Those had been Mildred's parting words and that was how it had been ever since. At the time, John had thought of suggesting he could take over the disciplining himself since the girl was staying with him (partly to act as a sort of housekeeper) but he had thought better of it. He had the idea that Mildred would not approve at all. She was inclined to have very Victorian ideas. Apart from those on discipline. 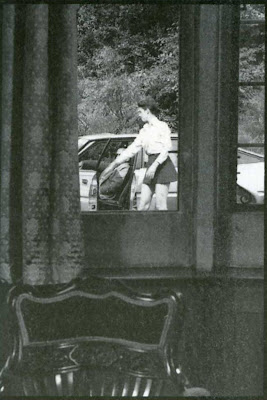 Reluctantly the girl opened the car door. One last appealing look. 'Don't forget my report,' he said, handing over a folded sheet of note-paper. She took it sulkily and walked slowly towards the house. He saw Mildred appear briefly at the open window and look down. He gave a little wave but she didn't appear to notice.

Contentedly, John settled down in the sun. To wait. And to listen. 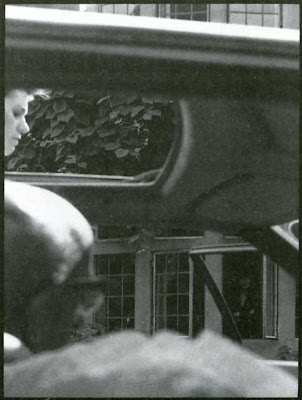 Into the familiar, frightening room she went, seeing Miss Mildred (as she had to call her now) was, as usual, wearing her gown. Though she was not a qualified teacher, she liked to do this – especially on these occasions.

'Good afternoon, Miss Mildred.' One had to be polite, difficult though it might be.

The tall, commanding looking woman shook her head sorrowfully. 'This is the seventh consecutive month, I believe. Am I making no impression on you, Debbie?'

'It would not appear so. Give me the report.' The girl handed over the slip of paper. It was studied and again the head shook. 'Slovenly housework... careless in appearance. And four detentions at school. I certainly don't like the sound of that. What were you up to, my girl?'

'Four times? It's a pity they can't use corporal punishment in that place. That would soon sharpen your ideas up. And a lot of the others, too. Still, fortunately, I can use it.'

The girl fidgetted nervously. There was no point in making excuses or pleading. It never made any difference. 'I... I'm sorry...' she said lamely.

'Let's have that skirt off then.' Mildred became suddenly brisk and walked across to her desk, opened a drawer and took out a clothes brush. It had a long head and a long handle. Debbie paled. Apart from the cane, which was used very rarely, it was the instrument she liked least of all. It stung abominably. Far worse it seemed than the strap or the slipper. The back of that brush was so hard. Near to tears, she removed her skirt – and then saw that Mildred had moved the chair, on which she customarily knelt to be chastised, right to the open window. Why on earth had she done that? 'Up you go,' came the order. Hesitantly, Debbie knelt up on the chair. Soon it would all begin again. The pain, the shame. Oh what an awful life it was! As soon as I'm 18, I'll run away, she told herself. But that was eighteen months off yet.

She suddenly realised she could see her dad. There he was still in the car. Luckily he seemed to be dozing. It would be all the more shaming if he could see her suffering. 'Let's have those knickers down, Debbie.' Luckily he couldn't see that anyway, she thought as she pushed down the white briefs so that they clung around her thigh tops. Being bare made it seem far, far worse even though the brush would have stung just as much through those thin briefs. 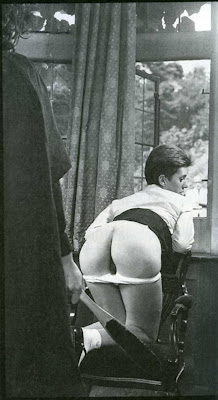 'Six for slovenliness,' Mildred said. 'Six for careless appearance. And three for each detention. How many does that make, Debbie?'

'Not at all,' came the firm reply. 'Let me tell you something, my girl. You are at an age when strict discipline is essential for your upbringing. Let me tell you also, that for every detention you get next month I'll give you six. And more than likely I'll use a cane. Think about that when you're in school.'

A deep sob as Debbie tensed herself. Oh not too hard, she prayed!

As usual, it hurt even more than she had let herself remember – and Debbie uttered a gasping cry of pain. Not too loud... oh no.. or I'll wake him up. She summoned her resolve, clenching her teeth.

Whacckkk! A whinnying sound came out and her head tossed back. Oh don't wake up... don't! Whaaaccckkk! Oh... oooh.. it was hurting so! And yet it was only just beginning. How could she stand it? Whaaccckkk! A strangled yelp. She just couldn't help it. Whaaaccckkkk and again Whaaaccckkkk! The stroke following more quickly caught her by surprise and she yelped even louder. Stay asleep... please... please!

'Six for slovenliness, Debbie. How many more to come?'

'Eighteen, Miss Mildred. Oh please, Miss Mildred, can you move the chair away from this window?' Debbie turned pleadingly. 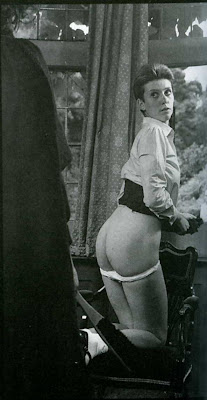 'Certainly not. It's a hot afternoon...'

'Come along, get that bottom square, my girl. The worst part of your punishment is still to come.'

Don't I know it, said Debbie to I herself, forcing herself back into position. Soon welt would be I overlaying welt.

Mildred, an expert in these matters, gave the girl a five minute rest after the twelfth stroke. Her bottom would be burning nicely and there was no harm at all in making her wait for the second twelve. Rather to the contrary. In Mildred's opinion, waiting was an integral part of punishment. Ideally, a girl should be told of her punishment to come overnight so that she had plenty of time to contemplate it. Most salutary.

Miserably, Debbie remained kneeling, looking out of the window. Tears made the landscape shimmer. Dad still seemed to be asleep, but it was difficult to see since he wore dark glasses. 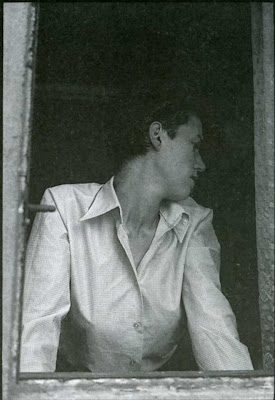 She felt her buttocks clench convulsively with dread. I must be brave, I must be strong, she told herself desperately. I must not yell too loudly.

But the first of the second dozen, descending agonisedly over an earlier welt, made her shriek. And Debbie went on shrieking – and begging – whilst Mildred went on remorselessly wielding the clothes brush.

Soon it no longer mattered to her whether the figure slumped in the car was asleep or awake...

There was only ever-mounting pain. 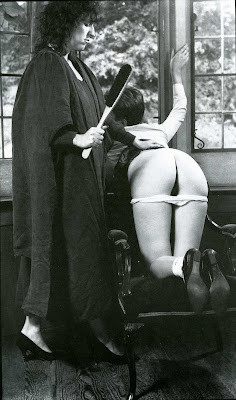