'Your Aunt has left this matter entirely in my hands, Elizabeth. I want you to understand that.'

She stood in the middle of the sitting-room, feeling quite desolate. So alone. Mrs Mason was not her Aunt, nor was her husband, her Uncle. It was only custom over the years that had given them such nominations. Elizabeth knew she was alone.

Her Report lay on the table.

She knew she had not done well last Term. But her mind had been so much on other things. She was sixteen now, growing up. Other girls at the School had parents. Love and attention. She was alone. That was very difficult to adjust to when one finally became aware of it. No family. Just a tiny individual in a vast world. An uncaring Universe, indeed.

'Not at your best?' Uncle Walter's eyebrows went up in astonishment. 'You're a healthy young girl. You should be approaching your prime. Physically and mentally.'

'How ridiculous!' Walter tugged at his beard. 'There you are, in one of the more expensive Boarding Schools, surrounded by girls of your own age, saying you are lonely! I repeat, that is ridiculous.'

Elizabeth swallowed hard. She knew her Uncle would never understand. There was no point in arguing about it. He, and her Aunt, had their Rules; she had her natural intuitions. 'I can only tell you how I feel,' she said meekly.

'This Report is a disgrace,' said Walter, picking it up. 'There is hardly a single subject which is not criticised by the phrase 'Could Do Better.' To my mind, Elizabeth, that is an euphemistic way of saying you are lazy.'

Euphemistic? What did that mean? Oh why did grown-ups always seem to live on another planet? If only there was someone else to turn to.

Walter shrugged. 'That is what you say. However, your Aunt and I have decided that you should be encouraged to try far harder next term. We are plundering our capital to pay your fees and, quite frankly, we don't want to see them wasted. That is reasonable, surely?'

'Yes... yes... Uncle...' Elizabeth felt tears coming again. Though she didn't like her Uncle and Aunt, she realised they were spending a lot of money on her. It distressed her that she couldn't be better. On the other hand, nobody seemed to ever look at things from her point of view. An orphan. A nobody. Oh how she would have loved to have lots of brothers and sisters! And, of course, parents she knew. That, however, was something she could only dream about. She was faced with the actuality of Uncle Walter and Aunt Grace.

'I have to tell you Elizabeth, that your Aunt and I have decided upon a rather drastic course. We, jointly, consider it the correct means of improving your educational efforts next term. It is an old-fashioned recipe, but I think it will work...'

'O-ohhh... what is that?' Elizabeth half knew (for that had been hinted at before) but she didn't want to truly believe it.

'Elizabeth,' said Walter (trying to look formal rather than lustful), 'you are going to be soundly spanked. No... don't interrupt me... and... if you do not improve next term, you will be even more soundly spanked. Your Aunt and I are convinced this is the only way to deal with this most serious lapse in your behaviour.'

'Auntie is not going to spank you,' announced Walter firmly. 'I am.'

He has told me what to do. I am shocked and shamed. But what else can I do? I am alone in this world. They think it is right. How can I say it is wrong? I am so much younger than they. I have no experience — not truly — of this world. In fact, I have lived in a contrived world for so long.

I stand in my small bedroom, still hardly believing it. Before me is my narrow bed. Outside the darkness of a winter's night.

As he instructed, I have removed my school skirt. Thus I wear only my white blouse and tie, blue school knicks, and white ankle socks. It makes me feel even more helpless. More lonely.

It seems I have been standing here for so long. Just waiting. Maybe it is not more than ten minutes. When will he come? Ten minutes can be an age.

When will he come?

I can hardly believe he is actually going to spank me. It doesn't happen to girls of my age. Not nowadays. I don't know of any who have been spanked. Anyway, if they have, they've never said.

On the other hand, I would never tell, would I?

It is all so shaming.

Oh when will he ever come?

His instructions were clear. Stand by the side of the bed — skirt off — until I arrive. 'It is a matter of discipline, Elizabeth.' She could still hear his voice. The trembling within her intensified. What would it be like? Nothing like this had ever happened before. She knew about olden times. Children being beaten. But it didn't happen today.

I must be brave. They have looked after me. Done their best for me.

Perhaps they are right.

Perhaps I am being lazy and stupid. There could be many young girls in this world who would like to change places.

Perhaps not at that precise moment, though.

He was nervous. But strangely confident. One might have called it a nervous excitement. After all, he had been waiting a long time. For twelve months or more he had wanted to smack that girlish curving bottom. For a legitimate reason, of course... But there had to be a reason and a time. They seemed to have arrived.

Beyond that, Grace had finally and fully agreed. 'Old-fashioned methods are often the best, Walter,' had been her words. 'I'll leave it to you.'

Well, it had now been left to him.

As he opened the door, he wondered for a moment, if she would actually be there. But she was. More than that she was standing exactly as he had ordered. Facing the bed, with her skirt off. 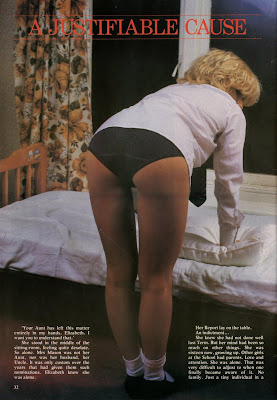 Oh what an enticing bottom it was!

No... no... he must not indulge himself. This was a matter of family discipline. That was what it was, wasn't it?

But, oh, how that bottom swelled.

He would have it knickerless!

And he would smack it and smack it!

She deserved it, didn't she?

When you thought about it, there was nothing really wrong about it. Girls had been having their bottoms smacked for years and years. For centuries. Once it had been quite the normal thing. It was only recently that some people had started to pontificate about it.

A lot of rubbish.

He knew he was well justified. Grace had confirmed that. He saw that the girl was crying softly; trembling. He could understand that very well.

My goodness, she had grown up in the last few months.

That wasn't a schoolgirl bottom, even if it were clad in schoolgirl's knickers. It was the bottom of a young woman. His desires too. Particularly that desire to spank that lush young flesh.

She was a naughty, lazy girl... and she deserved it. He was justified!

He closed the door quietly but firmly. This was the moment. 'Elizabeth,' he heard himself saying, 'kneel by the side of the bed and bend across it.'

'It has been decided. It is for your own good.'

His tension subsided a little as he watched the girl kneel. It seemed she was going to comply. That was something. That was a start. What would happen later was still a matter for conjecture.

The blue knickers fascinated him; so did the swell of the buttocks. Now it was all actually happening. And it had occupied his mind for so long.

Elizabeth was about to be spanked. By him.

'Take down your knickers,' he said, finding himself choking on the words which had been in his head indefinitely.

It was one he had expected. 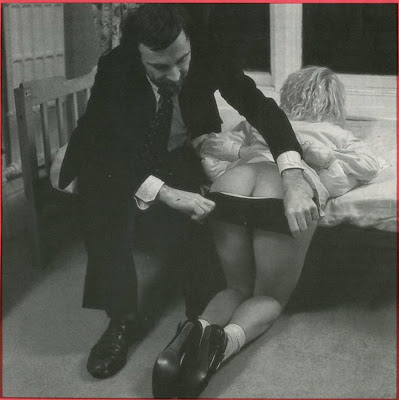 Walter decided immediately it was no time for prevarication. He must act. Resolutely, he moved to the bed, pinned the girl over it and pulled down those blue knickers. The swelling nakedness of girl flesh was exposed to him. Flesh that deserved to be punished. 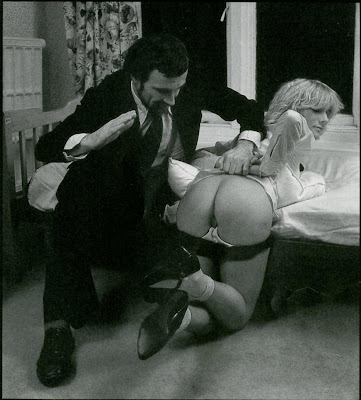 With hand on the girl's back, Walter began to slap the soft-lush flesh. Hard... hard... hard! Oh what a lovely sound it made... oh how delicious it was to do. Again... again... again!

'Of course I'm hurting you...' panted Walter. 'That's what you deserve. That's what this is all about.'

Again and again Walter's hand descended on the pulsating flesh... getting redder and redder all the time... until Elizabeth, almost frantic now, twisted off the bed and ran for the door. From his point of view, sensibly Walter had locked it. For, he was by no means finished with this youngster yet. She deserved a spanking and she was going to get a good one!

Elizabeth was struggling desperately to escape Walter's grasp. She had never imagined it would be as terrible as this. She had had enough... more than enough!

But then she found herself over his knees, pinioned firmly, her burning bottom helplessly exposed. 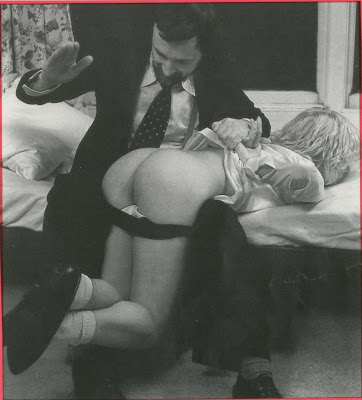 He didn't stop. Uncle Walter, inflamed by the release of a fantasy held for far too long, went on spanking and spanking. Until his vein-lined face was as red-puce in colour was Elizabeth's bottom. Only then did he sink back in exhausted happiness, dimly realising that Elizabeth was thrashing about on the floor, hands pressed to her nates, sobbing and choking unrestrainedly.

She deserved it, he told himself. It will have done her the world of good.

I deserved it, too, he thought. I've waited so long. But what good will it have done me? Will I have to wait until the end of next term?

'No trouble, Walter?' Grace put her knitting down.

'Nothing that worried me, my dear,' replied Walter, still trying to appear calm after the rigours of the evening. 'I dealt with her adequately, I think.'

'Good...' Grace nodded. 'It has occurred to me, Walter,' she said, giving him a sly smile. 'It might be better if we had Elizabeth at a local school. Not Boarding. Then we could keep a closer eye on her, eh? What do you think?'

Walter realised, in that instant, he had just about the most understanding wife possible. 'I... I... er... yes... I definitely agree...' he said. Then he got up and poured himself a very large Scotch. His right hand was so hot and sore, the glass really was most difficult to hold! But no matter! 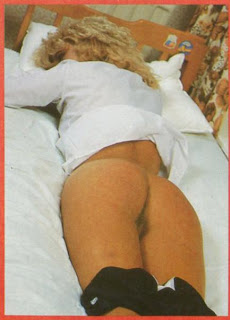