Moments in C.P. History
A Series by Paul Melrose

I should explain something.

In Februs in the 90s were published on 14 issues of this series. Alex in his blog in 2008 posted the edited version only 13 stories from 14. I, in turn, have only 9 original texts from the magazine. So it happened that I don't know in what order in the magazine were published texts from 11th to 13th, and I do not have one of these texts at all.

I can only assume that this picture belongs to the missing issue: 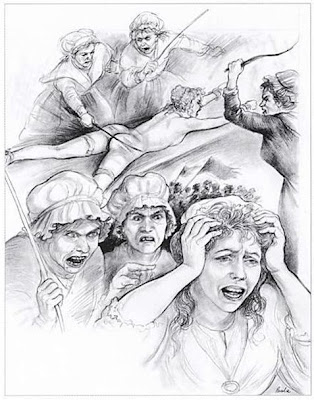 but I'm not sure in this.

If I ever find the missing issue of this series, I am sure I'll post it in my blog and tell the visitors...

The United States, throughout its history, has long had a tradition of corporal punishment and even today, when 'civilised' Europe has made the use of beating illegal in prisons and schools, the US continues to exercise 'state's rights' in the application of corporal punishment, particularly in its schools, to both males and females should the public be perceived to favour it, thus there is no common policy across the country.

Why then, you may ask, is 'Moments' going back to the schoolrooms of the United States of nearly 200 years ago, to 1823 in fact, when CP is so prevalent in the country's schools today? Well the reason is that the case in point created a flurry of attention for a number of reasons and eventually led to a change in the law of the state concerned.

In the United States today, most of the states which allow school beating, in the form of the paddle, are in the deep south and, sadly, a disproportionate number of the recipients are black.

The case of Martha Douglas back in 1823 was very different both in the nature of the state, the background of the girl concerned and the nature of the punishment. She was a white girl, a middle-class grocer's daughter, well educated and living in Massachusetts, a state which, despite its notoriety during the witchcraft hearings, was regarded as civilised and 'decent'... a far cry from its 'country hicks' down south. The ripples from the Douglas case changed American perceptions for a time, the resultant furore and highlighted legal anomalies keeping the lawyers busy for a long time.

Martha Anne Douglas was born into a well to do household in Cambridge, Massachusetts in 1805, an attractive and intelligent girl whose parents had always taught her to respect her elders, to be polite but to stand up for herself, honestly and firmly. The young girl took the words of her parents to heart and grew up to be a daughter of whom they could be proud. At the time of the incident in question, Martha Douglas was one month short of her 18th birthday, a young woman rather than a child, and already 'walking out' with a young man with marriage a distinct possibility in the not too distant future. Until then Martha had to behave like any other obedient schoolgirl studying hard for her examinations.

She was a keen and enthusiastic attendee at the Leonard Rushmore Public School in Cambridge where she received glowing reports of her attitude and application. Like most public schools the classes were mixed ones with boys and girls equally divided.

The school employed an English teacher named Jessica Stowe and rumour had it that Mrs Stowe was not over enamoured of Martha Douglas, considering the girl to be too smart, too ready with a quick answer and, in effect, a show off. Such feelings were maybe a recipe for what was to occur on the fateful day in May during Jessica Stowe's English class.

During her lesson, Mrs Stowe heard what she later described to a packed courtroom as whispering and giggling from behind her as she wrote on the blackboard. She also swore that the voice, which was unmistakable, belonged to Martha Douglas. She turned round and ordered Martha to walk out to the front of the class and extend the palm of her hand for one stroke of a thin cane.

It was now that the girl's parental advice, to be honest and stand up for herself, were to prove her undoing. Red-faced with embarrassment, the girl rose to her feet and said politely 'Ma'am I have done nothing to be punished for'. Aghast at this show of insolence, Jessica Stowe demanded that the girl come out to the front where the punishment would be increased to three strokes for her insubordination. Close to tears, Martha remained defiantly in her place and muttered 'With respect, Ma'am, no I will not! I am guilty of no offence'. The class was now buzzing for no pupil had dared to behave in this way before.

Jessica Stowe, while-faced with rage, stormed out of the classroom and returned some ten minutes later accompanied by the male Principal and two other male teachers. Whatever story Mrs Stowe had told must have been convincing because at the behest of the Principal, the two teachers grabbed Martha and dragged her kicking and screaming to the front of the class where she was forcibly stretched across the teacher's desk by one of the male helpers. 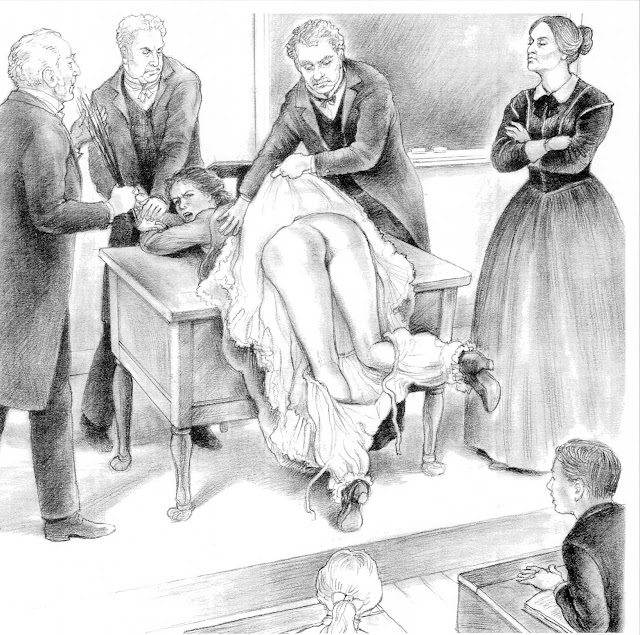 As the girl shrieked in horror and shame, the other teacher pulled up her long skirt and petticoats while the Principal untied the strings of her drawers and pulled them down, baring her bottom to the entire mixed class. Producing a birch rod, he then told Martha she would receive a punishment she would remember all her life, then delivered twelve scorching strokes of the birch to the girl's naked buttocks as she wept and squealed. When the punishment was over she was made to stand in the corner, red bottom on display for the rest of the lesson.

When the lesson was over, risking further punishment, the humiliated Martha fled from school and went home, collapsing in hysterics into the arms of her mother. When the facts were known and the damage inspected, Mrs Douglas sent for the magistrate. As a result the three male participants in the affair were arrested and charged with indecent abuse of a minor.

The court case lasted three weeks and the legal wrangles went back and forth as the prosecution argued that the laws of Massachusetts had clearly been broken in that the whipping of females on the bare buttocks was forbidden by statute. Defence lawyers argued that a school is 'a state within a state' where decrees affecting the judicial treatment of females do not apply. They argued that the school had a written constitution and a clearly evident corporal punishment policy.

The prosecution then replied that this did not cover the bare bottom punishment of pupils AND in full public view of the opposite sex too, that the teachers had exceeded their authority and committed a punishable offence. The defence replied that the corporal punishment policy was deliberately non specific in order to allow situations such as that of this 'unruly girl' to be dealt with in the appropriate manner and that all parents who valued the preservation of in loco parentis authority would support the action of the Principal and his staff. They argued that the laws of the Slate had no place in this matter and that, unless wilful and malicious cruelty could be proved, the school was within its rights to punish the girl as it saw fit.

The defence argument won the day and the three teachers were acquitted without a stain on their characters. The arguments about the decision raised hackies in the US press with the Conservative newspapers supporting the decision and the Liberals calling it an outrage.

Martha Douglas' parents appealed against the verdict but to no avail. They then sued privately and lost that too, the girl now forced to leave school after so much notoriety meant she could no longer expect to receive fair and unbiased treatment.

Although she lost the battle, in the long term, Martha Douglas and her family won the war, although a little late to save Martha from humiliation and indignity. The Massachusetts Senate, embarrassed by the adverse publicity, brought forward at its next sitting a bill which encompassed the State's public schools and which expressly forbade the corporal punishment of pupils of either sex on the naked buttocks either in public or in private.
________________