Come into my Parlour

Come into my Parlour
A short story by Paula Meadows

She was young. She was beautiful. She was titled with a paragraph in Debrett. I was forty two, manifestly undistinguished and in awe of her. I had not won the second world war, driven racing cars or climbed mountains. I had worked all of my life as a professional with various charities and had considered it a feather in my trilby when I was appointed General Secretary to A.S.F.A.T.A. & I. which stands for Associated Societies for Aiding the Aged and Infirm. We ran homes for elderly and invalid men and women, put out to grass and otherwise neglected by our basically uncaring society. A very worthy cause. Subscription list enclosed!

I was not afraid of the aristocracy per se. Oh no. All major charities rely on patronage, Royal, aristocratic or merely City Rich so I was accustomed to meeting and working with volunteer helpers many of whom also had paragraphs in Debrett. But Lady Millicent was young, beautiful and I'd seen her photograph in Country Life, riding, swimming, and being received at Buck House long before we actually met. When we did meet she was aloof, condescending and her life outside my committee remained a closed book.

Her smile was ravishing, but polite. It invited no familiarity, and the fact that she caused me to have an erection every time I saw her was a fact that only I knew but she did not begin to suspect. I think. I hope. I believe.

Until the day, almost four years after she had come into my office to introduce herself, when she casually asked me to escort her to the house of an amusing friend she thought I'd be interested to meet. The friend was considering an annual commitment in the form of a financial donation which was tax free. The friend was a famous high society portrait painter.

I agreed at once and a London taxi whirled us to a very good address in Belgravia. A trim housemaid answered the door and Lady Millicent and I were ushered into a stately parlour where our hostess, Amanda Felicity Cummins greeted us. She was clad in trousers and a woollen jumper that was filled with bosom which jiggled. A mannish girl, this artist, with short hair and an abrupt manner which got down to business at once.

Lady Millicent seemed unexpectedly nervous and withdrawn, perching herself primly on a hard high backed wooden chair. I was offered a portion of a large settee and a cup of Lapsang Souchong, with lemon. The business of the evening was accomplished within ten minutes. At which point I expected to be ushered out of the house and on my way.

Instead our hostess rounded on Lady Millicent with an abruptness that startled me.

"Well Millie," she snapped. "Don't just sit there like Patience on her bloody monument. Strip!"

"Don't be so damned silly," Amanda exploded. "I'm painting you in the nude, aren't I? Let's have a look at you then. Don't play the spoiled aristocratic bitch with me darling. I know you too well."

Did she mean the maid? Or me?

I sat glued to the settee, my arms wrapped around my kneecaps.

"Get 'em off," Amanda said tersely. "Stop wivering and waving your scruples about. You haven't got any. You know it and I know it and so does Polly Perkins over there."

Two nervous hands undid two unimportant buttons. A pleading look mixed with reproach and outraged modesty. Amanda, hands on hips smiled grimly. "Move it duckie," she said. "Or you know what happens, don't you?" From behind her back she produced a riding crop which she flexed in her large, spatulate hands.

Polly Perkins, the housemaid moved around from behind the settee. She winked at me. 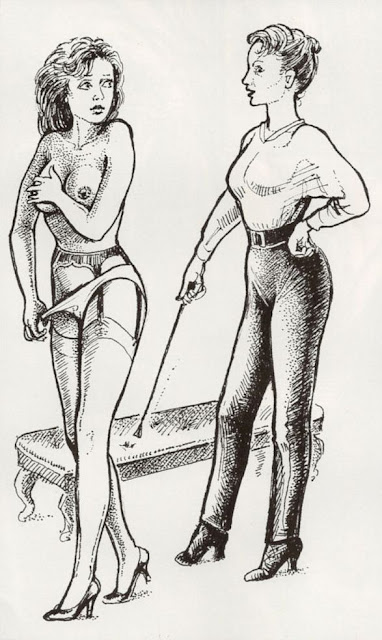 "That took far too long," said Amanda. "I insist on instant obedience Millie. YOU know that. Kneel over the stool." 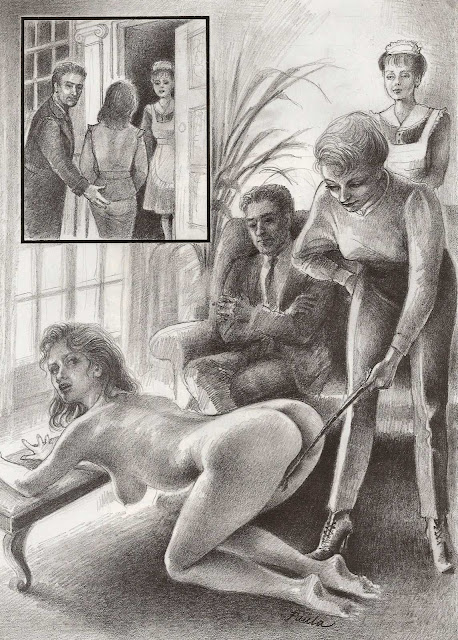 What followed thereafter is best described in pictures and that is how it is described overleaf. I learned a lot about Lady Millicent I'd never suspected before. 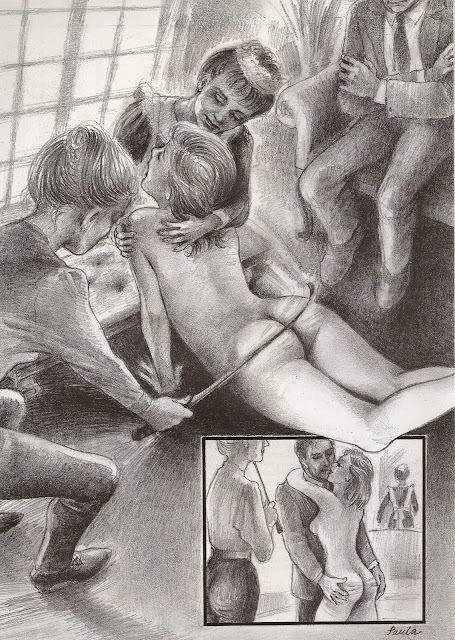 The distant hauteur of her public persona dissolved into cries, twisting and turning as a network of welts covered her buttocks crimson and she melted into a warm sensuality that permitted every possible liberty to be taken.

On Monday, at the Annual General meeting she swept in, greeted me with her usual polite condescencion and her ice blue eyes warned me to keep my place and act as if it had never happened.