A Matter Of Communication

A Matter Of Communication

A big girl in thin football shorts. As the seawash sprays against her, it is apparent that she is wearing little else, save a simple cotton teeshirt. She holds a brightly-coloured triangle of fabric in each hand. The offshore wind has ruffled through her hair, but her recent exertions have given her a glowing healthy sheen upon her bare young limbs. The Island Master sits a few feet away, on an old wooden bench. Dee is undergoing instruction. And she is achieving very little success. As yet.

He checks her stance. 'Feet together, young lady. Stand up straight. Hands by your side. Hold your stomach muscles in. Pull your shoulders back. Come on. Sort yourself out! You will not be slovenly in MY presence!' Susanne jumps to attention. In her hands she grasps the two brightly-coloured triangles of fabric. 'Now face the sea and send your message, young lady.' She turns, so that she looks out towards the soft blue rolling sea. The Island Master is watching her intently. Watching her strong healthy limbs being buffetted by the crisp breeze, rippling through her thin tee-shirt. She raises her arms. The tee-shirt pulls away from her shorts and he sees the thin band of smooth girlish flesh exposed to the wind and the seawash. The salty mist lights up the thin light-coloured fuzz where her bottom curves begin to jut out. 'No. No. No! That is NOT right. You know that is not right!' She turns to face him again, arms by her side, coloured scarves dropping from her fingers, a look of exasperation written across her young face. 'It's no use. I just can't remember.' She shrugs her shoulders. The Island Master's anger is ignited by her attitude. He rises to his feet. 'How dare you! How dare you, young lady! You WILL learn. I promise you. I have excellent ways of teaching the likes of you!'

The seawash is turning to rain. The man wraps his heavy coat around him. But Susanne has no protection. She awaits his orders, and then scampers ahead of him, back towards the Master's Cottage, the rain now soaking her thin clothes, and her windblown hair. 'Wait for me in the front room,' he shouts after her, watching her delightfully-rounded bottom bobbing as she runs, the wetness of her tight shorts ensuring that every subtle intimate curve of her bottom is outlined for his consideration. He follows her over to the building, takes off his coat and hangs it behind the kitchen door. With the heavy door locked and bolted against the intruding bad weather, he turns up the hissing gas fire. And then he joins his young charge in the front room, ready to teach her a lesson she will remember.

'Please. Can I go and get dry?' she asks him. He shakes his head. 'You'll soon get dry. Physical exercise. That's what you need.' She pleads with him. 'But my tee-shirt. It's wet and cold...' He interrupts her. 'Then take it off, young lady. Take it off. And hurry up about it...' Susanne hesitates for a moment, wondering whether he was offering a suggestion or issuing an order. He repeats his words, making it quite clear. 'Take your shirt off!' She drops her coloured scarves and quickly tugs the sodden fabric up over her head. Her young breasts are firm, hardened by the wind and the coldness of the rain. The little rosy-red nipples are standing erect and proud. He walks into the kitchen and returns with a towel, warmed over the hob. 'Rub yourself dry. And hurry up about it.' She turns away from him, coyly, as she dries her upper body, the soft fluffy towel gently warming, soothing away the coldness and the damp. Of course, her shorts are still wet, still dripping, and her legs feel cold. Thank heavens it's warm in the house. He removes the towel from her clutches. She still looks so very pink. A glowing silky texture to her skin. 'Now. We must begin our lessons... again...' He takes his place, sealed on the old sofa by the side of the room. 'Stand up straight! Feet together. Keep still.' Susanne is out of breath with the exertions. Her bobbing breasts rise and fall. She finds it difficult to control her breathing. 'Arms and wrists in a straight line. Come on! You know the drill.' He hands her the coloured scarves. 'Now face me, and send the message 'C'.' She turns full square, so that he can see her clearly. She lowers her left arm, right down in front of her, the scarf dangling between her thighs. Her right arm she raises high above her shoulder. 'Good. Good. Now send the message 'A'.' Susanne keeps her left hand low and lowers also her right hand, until her wrist is level with the waistband of her shorts. The Island Master nods. 'Good. So you can do it, can't you. If you concentrate.'

'N' is the next letter she is given. She hesitates, staring at him. 'Come on, young lady. Come on... ' She lifts both arms, as if describing a cross. 'No. No. No! You stupid child!' She is corrected and shown the correct sign. 'Now do it again. Come on.' He persists, repeating each letter. Over and over again. ' 'E' is the opposite of 'C'. Now do it. 'C' with your left arm raised. 'E' with your right arm raised.' The Master orders her to repeat the four letters he has told her. C-A-N-E. She looks worried, attempting to remember his instructions. She immediately gets it wrong. 'No! 'C' not 'E'! You stupid child!' He stands up. 'Go to your room and revise! I shall test you again in one hour from now!' Suzanne quickly takes her leave, scampering along the hallway, her pretty breasts bobbing as she runs, her bottom, still encased in damp shorts, wobbling as she moves.

The man pours himself a stiff drink. He smiles to himself. These young recruits! They're all the same, these days. No application. No powers of concentration. Not until he applied his own very special methods. They always worked! The last girl had been just as bad. Slightly fat, and well-rounded. Melanie had been her name. She really had problems learning Morse code. Until the Island Master sat down with her and made her learn each letter. Then it really was quite easy. He sat down, on his old settee. And young Melanie was placed across his knee. Minus her skirt and knickers. And then each letter of the alphabet was tapped out across her bottom. Gently at first, just to remind her. Melanie would repeat each letter. And all dots or dashes spoken incorrectly were immediately pointed out to her. Forcibly! By the firm application of a smooth hairbrush across her blushing bare cheeks. Before long, poor Melanie had been beating out a distress signal with her bare toes against the flooring, as the man had been drumming certain other letters into her bare bottom. And between the dots and dashes there were yells and squeaks and ooohs and aaaghs... Melanie was word-perfect within the week. Each and every letter of the alphabet had been drummed into her. The rosy hue of crimson which adorned her bottom cheeks for the remainder of her stay was enough to ensure absolute perfection and full marks when it came to the final test.

He had devised a simple and perfect memory aid, employing a thin whippy cane and a round table-tennis bat. When a 'dot' was required, the bat would be applied, prompting a rounded rash of pain upon the victim's poor bottom. And when a dash was required, a line would be provided, courtesy of the cane. By the combined application of the bat and the cane, any letter of the alphabet could be spelt out. SPLATT! Melanie would shriek in response and then shout out the answer. 'Dot, sir, dot...' SPLATT!! Another impromptu yell. 'Another dot... OH Sir!' CRACKKK! That wicked cane would whip down and wrap itself around her upended bottom curves. Aggggh! 'What is it, Melanie? What is it?' She would drum her feet into the ground, desperately trying to rid herself of the sting of the bamboo. 'It's the cane, sir,' she would sob, loudly, until realising that he didn't require that answer. CRACCKK! 'I know it's the cane, you stupid girl!' She would sob away, and wriggle around across his knee, desperately trying to concentrate. The Island Master's lessons were always very energetic. Very tiring. And very effective. He even fancied young Melanie had lost a little weight when she finally skipped aboard the weekly ferry link to the mainland. But now, the problem was Susanne. It was time to make her work.

The girl had found another pair of shorts and a loose-fitting blouse. She was sitting on her bed, cross-legged, absrobed in the Semaphore Primer. As he entered her room, she stood up. 'Right, Susanne. Let us see how much you have absorbed.' He told her to remove her shorts. Earlier in the week, the instruction would have met with protest and refusal. But Susanne now knew better. Blushing pink, she quickly slipped them down, lifted them away from her bare feet and placed them on the bedclothes. 'And your blouse, young lady. Be quick about it.' He ensured there was nothing to get in the way of a period of intense instruction. And on this remote island, there was certainly no need for false modesty. 'Stand up. Feet together. Take hold of your scarves...' He stood by her side, the cane quivering in his hand. 'Now send the message as I instructed you.'

Susanne shivered as she saw the cane. She knew how and why it would be used. Any where. Her bottom was still tender from the exposure to the rain and wind. That cane would really hurt. Really bite into her tender flesh. She raised her arms and attempted the letter 'C'. It was wrong again. 'Bend over,' he told her. She sighed, and touched her toes, the scarves still wrapped around her hands. CRACCKKK! The cane sped down. She yelled as the pain shot through her, urgently wishing she could soothe the pain away. 'Stand up. Now send the message again...' This time, she got the first letter right. But then the 'A' was wrong. Again she was ordered to touch her toes. Again, the three feet of thin flexing bamboo whistled down and across her bottom cheeks. She shrieked, her feet pounding the carpet as she danced a little dance, right there in front of the Master. She was told to stand up. To compose herself. And then it was back to the message. C-A-N-E. Finally, after many cane-strokes, many tears and much exertion, the message was correct. Young Susanne had learned at least four letters. There were only 22 other letters to go. And then the numbers. And the special signs as well! 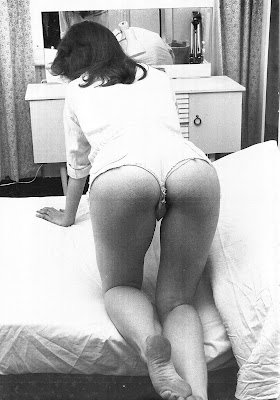 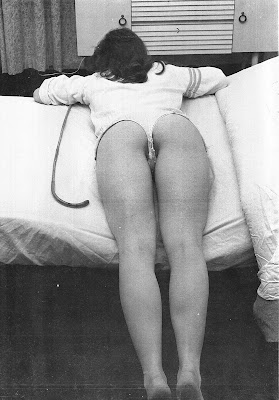 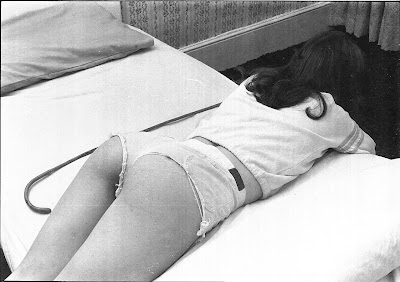 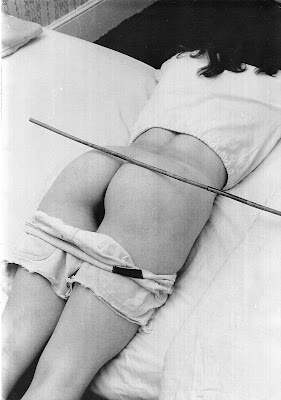 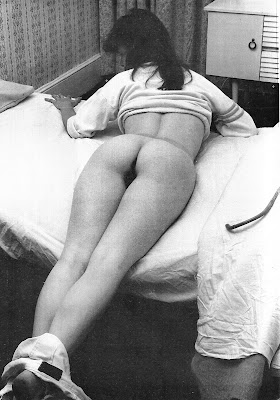 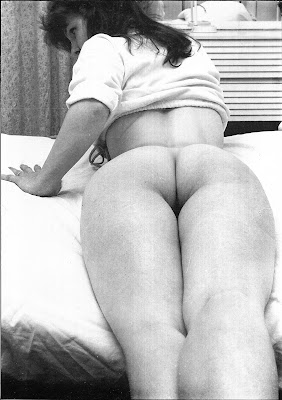