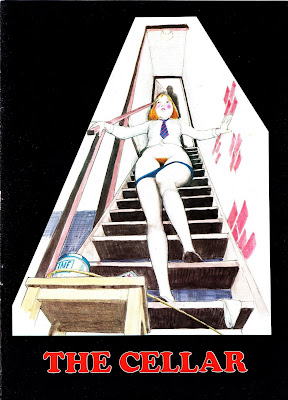 When the telephone in the study upstairs had rung, it could hardly have done so at a worse moment — that is, from young Bab's admittedly self-centred point of view. Those particular bits of 'self' around which her perception of sensation had been obliged to revolve for the best part of the last twenty minutes were those that she would have much preferred to have kept tucked demurely away inside her knickers, except that the said knickers had been demoted — by 'Uncle' Basil — from their duty as preservers of a girl's modesty, and when the phone rang were serving instead as a half-mast token of surrender a little above the level of Bab's knees.

Basil had excused himself from the proceedings down in the cellar with no more ceremony than a patronising pat to the girl's hot and bothered bottom, and she had been abandoned, panting frantically on the very brink of one of those embarrassing happenings that Basil called 'being a good girl', which could hardly be sillier really, because they only happened when she was brought down here for being a bad girl.

Now, several minutes after Uncle Basil disappeared up the rickety stairs, Babs snuffles miserably and brushes a tear from her cheek. Her shoes and socks apart, and discounting her knickers which are contributing nothing to the maintenance of her modesty in their forlorn station just above her knees, Babs is quite naked. Her vest lies rumpled on a spindly-legged chair together with her blouse. Her tie is draped over the chair back and her skirt is upstairs somewhere, probably on the study floor. Her cheeks are flushed and her lip pouts unhappily, as though the renewed onset of weeping is but a smart slap or two away.

The certain knowledge that the requisite slaps will most certainly be forthcoming just as soon as Uncle Basil returns makes her bottom tremble faintly at irregular intervals, and the equally unavoidable certainty that he will insist on beginning again, coaxing, teasing and spanking her by turns until she humiliates herself by doing what she was on the very verge of doing when the phone rang despite the smart in her bum; or perhaps even partly because of it — she really doesn't know — makes her knees go to jelly and her pouty bottom lip pushes out yet more disconsolately.

Upstairs, Basil is writing a name into his diary — "Ann — oh, Anne with an 'e'? Fine, at eight o'clock? OK. Thanks Reggie. And I'll come along to you afterwards — for a drink — alright? Good." He chuckles conspiratorially "And I'll give Babs your regards. I dare say she'll remember you." His chuckle becomes a smile as he listens briefly. "Yes — you interrupted me, as a matter of fact." He laughs again, "Such are the perks of guardianship." An eyebrow raises whimsically. "Hmm? Well, what about next weekend? I'll be gone all day Sunday — Babs will be here, of course. OK, Sunday it is. Speak to you about it later. 'Bye."

Downstairs, Babs hears a 'clump-thud-bump' as Basil leaves the study which has her thighs pressing uneasily against each other, squeezing and relaxing by turns for several moments in unintentional imitation of the little semi-static dance she was performing a few minutes earlier to Uncle Basil's expert coaxing. Bab's bum-cheeks tweak together as her uncle's footsteps approach the door to the cellar, and then they soften reluctantly as the sound passes like summer thunder into the distance. Each firm, full buttock is warmly crimsoned around the sitting down bits, and finger-shaped blotches extend round her flanks and down the upper parts of her legs almost to the level of her pulled-down pants. Overlaying this tender-looking redness are perhaps eight or nine roughly parallel marks which clearly do not result from the same application of palm to bottom that produced the generally well-punished look of the girl's unfortunate bum. A cane has visited these youthful cheeks, and very recently.

Renewed clumping from above prompts a sudden straightening of the girl's posture, bottom pushing out saucily behind and impudent breasts bouncing just the once as she pulls herself up to her full height. 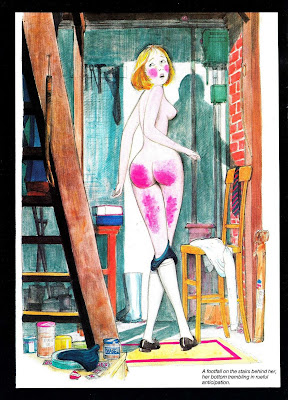 She looks up and over her shoulder and catches sight of a pair of brown brogue shoes on the upper stair, hears the click of the latch and the well-oiled side of a bolt. She stoops and picks up two weighty books, which she has to do with both hands together. Balancing the one on top of the other, she lifts them in front of her face and places them on top of her head. Trembling, she slides the books forward and back until she finds the point at which they will sit in equilibrium. Basil's footsteps approach and stop directly at her back.

His hand pat-pats up under her buttocks. They jiggle a little, each cheek in its turn, and the books try to slip sideways. Babs reaches up with both hands — the books are too thick to be held together by the span of one of her small hands; she has to hold each separately lest they should slide apart and fall. Uncle Basil seats himself on a stool at her side, his knees either side of her legs, her bottom convenient to his right hand and the warm, smooth downward sweep of her belly convenient to his left. Upon her head, Pilgrim's Progress, topped by an unabridged edition of Crime and Punishment, occupy both her hands still, which is, after all, the books' sole purpose. Hands which are kept busy above head-height cannot interfere with other hands as they spank and stroke and smack and coax and slap and slip between nervous thighs.

"Uncle Reggie sends his regards by the way," observes Basil, nudging the girl forward a fraction to get her in exactly the right position.

"Oooh — oh dear," says Babs warily as she shuffles the required half inch.

"Yes. He was wondering whether you might be in need of another lesson."

A loud, echoing report as Basil's hand cracks across Bab's nervous bum-cheeks cuts short whatever it is the girl is trying to say. She squirms her bottom desperately, feeling the heat of her earlier punishment returning instantly.

"I told him you were. Euclid has never been your strong point, and Reggie knows an awful lot about that sort of thing, you know."

"Oooo —" Babs remembers her last geometry lesson only too well, although she might have been forgiven for thinking it was actually more to do with anatomy.

A solid spank makes Babs start so that Pilgrim's Progress slithers dangerously backwards and Babs squeals as the tenderness in her bottom is re-kindled in earnest.

A second meaty slap sees tears starting from under her eye-lashes. She wriggles her hips and swerves a little aside and Crime and Punishment tilts perilously as Babs reaches down to give her bum, a frantic, illicit rub, and suddenly the book topples from her head and thuds to the floor.

Her startled gasp and wide-eyed look make this minor piece of clumsiness seem a desperate misfortune. Pilgrim's Progress is caught only just in time, but already the damage has been done.

But Uncle Basil is not listening. Leaning forward from his stool he can reach the slender, crook-handled cane on a hook screwed to a timber upright. The tip of the cane shivers in anticipation as it is drawn back and held bottom-high, threateing the girl's flinching cheeks. Babs looks behind and knows that there is no way out of the mandatory three stinging strokes for dropping a book, but she blabs out her gasping, tearful pleas any way. Basil listens until she subsides into hopeless silence, then the cane swishes round. Babs jerk her hips forward, pubic swell thrusting onto Basil's waiting hand. Two more strokes arrive with hardly two seconds between them, and suddenly Babs is blubbering in earnest, snatching and clutching with her one free hand at the fresh weals already swelling around the undercurves of her buttocks. 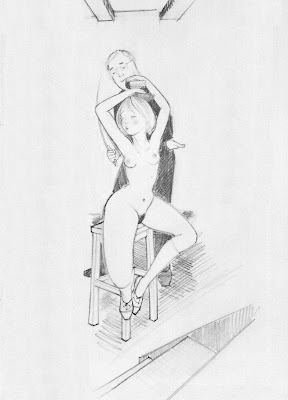 Basil lets her calm herself, which takes several minutes, then he picks up the dropped book and offers it to her. Babs takes it tearfully and balances it again on top of her head. She holds the volumes with both hands, shuffles unwillingly back to her place between Basil's knees, and eases the contact of thigh against thigh so that Basil's eager digits can take up where they left off: she wants only to get it over with now, and with the slow, rhythmic application of Basil's right hand to her quivering bottom to help her along Babs eventually begins to shudder a little every now and then as she pushes forward onto Basil's busy fingers. Quickly now that she is on the way, her reluctance becomes co-operation, her to and fro-ing seems to be less a response to the continuing spanks than to the insistance of Basil's expert coaxing. Whimperingly she obliges at last, eyes tightly shut, knees bending, fingers loosing their grip on the books wobbling dangerously on her head. Pilgrim's Progress hits the chair and bounces to the floor.

Allowed to slip off the hook now that she has been a 'good girl' as required, Babs slowly collects her wits and keeps her face averted from Basil's smug expression, hands wandering automatically back to their place upon the crown of her head despite the absence of Pilgrim. She edges sideways as Basil gets to his feet but keeps her bottom pushing out obediently behind her, keeps her legs together and her back hollowed, and hears the faint, tinny sound of silver foil being torn apart. Warm hands pilot her to a position directly in front of the stool, and nudge her forward until her thighs are touching the cool wood. A gentle shove in the small of her back is the signal to lay her tummy across the seat. She holds onto the stool's legs with both hands and spreads her feet apart.

Basil's fingertips, slipped under her loins and lifting slightly, hint that she should be paying attention. Babs elevates her hips a little and for the umpteenth time begins to count the weeks 'till her eighteenth birthday. It seems a long way off.
Posted by Dmitry at 10:00