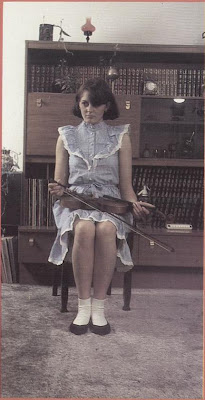 The fact that it was her own fault did not help one little hit. She had complained to Mr Summers that she thought it was the instrument itself that was wrong. That is why she was making such a hash of her lessons. The soft eyes, hazel haired young woman had often repeated that the violin itself did lend to her ability and natural talent to play the fiddle. Then he had made that awful, unbelieving threat. Right here in this brown study of a room. When he had told her that she lacked a natural discipline, she had not understood. Then he had painstakingly told her that his idea of discipline was something of a personal nature, and had even gone on at some lengths regarding the lack of discipline in young people today. She had not considered herself one of the 'young people' because she was more than twenty years of age.

She was slightly shy and this gave her an added piquance of her softly contoured face. Her eyes were trusting of anybody in authority and her whole being was geared up to being a violinist. Sadly, the fiddle on which she practised and took her lessons belied the ability that she thought she possessed.

Mr Summers was a past master with a violin and he had produced some beautiful music from their very instrument that she had complained about.

Although it seemed fair that he should expect something similar from her, she could not understand this new theme of his. He had shown her he was angry with her excuses and that was when he had told her that she was not too old to be disciplined. The remark had left her with burning cheeks. The very deep feeling of shame that he had invoked by making such a suggestion had caused her to writhe at the very thought. And he had increased the tension in her body when he had explained what he considered proper methods of discipline.

She tried not to visualise the scene which his lecture had summoned to her mind. Surely he was trying to frighten her into making greater efforts. He could not mean that he considered her a pupil to be actually disciplined. Some of his younger pupils, yes... but not her... not now she was twenty years of age. She had to purposefully surpress the very picture of her lovely young body being placed over his lap and her panties down so that he would be able to see her bare bottom stretching so that his hand could actually spank her.

All the time that he had been speaking to her, she had held the violin as though it was something with which she could protect herself with... and yet this was the very instrument that had been the cause of him making the astonishing statement that she needed discipline. Vicky had never been naughty in all of her life and so the question of discipline had not arisen. The thoughts now riding high through her system was that there was no way she was going to let him punish her on her bottom... covered or not. It was unthinkable. That afternoon he had patted her bottom when she had passed him to leave the room. That in itself had been awful. She did not like him, or anyone else for that matter to touch her like that. It was a very intimate part of her body, she felt, almost as intimate as the soft lips between her legs. She should have told him there and then, on the spot that he had no business patting her dress where it covered her rounded bottom. Yet, and here was the rub, one did not address oneself to Mr Summers in such a cursary manner. He was not the type who one could speak to like that.

But the following week when she had turned up he had patted her bottom again as she had walked through his front door. This was not to be habit forming, she felt and she would tell him so as soon as they were alone.

As she entered the study where she practised, she saw the instrument case... he invited her to open it... her eyes opened wide in amazement... it was a real Strad... the King or Queen of violins. Almost reverantly she picked it up and cradled it gently...

'You have been complaining about the age of the instrument you have been practising with... now let me hear you prove that you can do better with a master instrument.'

He had called her bluff... she made the same hopeless mess as she did when she was playing with the broken down instrument.

'Stop! Stop! For heaven's sake stop,' he put his hands over his ears as though to blot out the cacaphony of noise.

Vicky nearly burst into tears at the helplessness that filled her very soul.

'Now come here Vicky,' his serious tone instructed her to stand next to him.

There were many things that Vicky wanted to say, but Mr Summers had his hand up her dress!!

She would have to raise an objection... in a minute. The trouble was the fact that she was wearing ankle socks and therefore her legs were bared so his stroking and investigating hand came into contact with her smooth skin! In a minute, when he stopped speaking she would tell him that she was not prepared to take this sort of treatment... his hand inside her brief white knickers actually feeling the smooth skin of her tightly clenched bum cheeks.

She was shuddering the uncontrollable tremors of deep shame. This was the unthinkable happening. And all the time he was explaining to her that this was the part of her body that needed the discipline.

Her bottom had done nothing wrong!! Why should that be punished? Not a question to be asked out loud or course, but she desperately ached to move away from that investigating hand.

'Mr Summers,' she choked. 'I am not prepared to have my bottom spanked. I am too old to be smacked on my bottom and I do not think you should be doing this.' 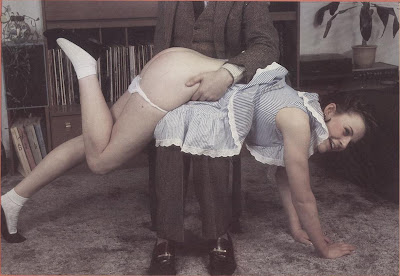 It was very properly said and she had spoken resolutely. The trouble was that she had been standing next to him when she had started to make her formal protest but by the time she had finished, she was neatly stretched across his lap and her dress was already raised above her waist!

Her brief white panties were being eased down her body and now they were stretched tight some half way down her thighs and the bottom that she had thought so precious and private was openly on view to his eyes and what was worse, she could feel his palm smoothing out imaginary creases from the perfect smoothness of her tightly clenched cheeks.

This was too awful for words. Not only the shame of exposure but suddenly there was the introduction of stinging anguished pain. Vicky realised that all her thoughts that she was too big to be spanked had been a pure waste of time. Mr Summers was doing the impossible and unthinkable. He was bringing his hand down onto the bared cheeks of her shapely bottom and he was making it sting... what was more he was increasing the agony of her humiliation.

This was hateful. It was demeaning and stripping her of modesty and dignity. She had to keep her legs pressed tightly together too... it was getting worse by the second because the hot skin where his hand landed was raising in heated temperature and the sting was transforming into very real pain.

Vicky punctuated her protests and complaints with involuntary kicks of her feet and Mr Summers was treated to a view of his special pupil that no other person would ever hope to see.

Soft nates that had been so smooth and creamy white were now exhibited in stark contrasting red and that red was getting deeper and deeper each time his hand laid across her bottom to teach her the rudiments of what discipline was all about.

His left hand had to press down firmly on the small of her back and she struggled fitfully.

Vicky would never have believed that such pain was possible. She was not sure which was worse, the pain or the shame. But to have to be placed so squarely over his lap whilst he spanked her was something she could never have imagined. She had thought that it would be painful but nothing like this had entered her mind. It was a full explosion of various emotions. The shame was awful, the stinging hurt was impossibly expressive and never ending, and there was too the fact that she was actually over his lap, like a naughty girl revealing the full exposure of her naked bottom not only to his eyes but also the full treatment of his able spanking palm.

When he had reduced her to tears he released her. There seemed to be no protest left in her now. He directed her to her seat and insisted that she sit there, dress fully hoisted and with both nates fully exposed so that when she sat down she was showing off the cheeks that she once thought so private and precious.

All those silly thoughts were banished. Vicky was still responding to the shameful agony, the degradation and the reminder too that if she had to be disciplined, it would be by the medium of going over his lap. It would forever be a terrible reminder of the distress that her body could be subjected to if ever she thought herself too precious to have to bare her bottom for a real good old fashioned spanking. 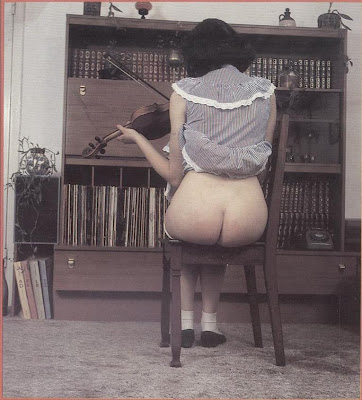