The short story from Roue 01, specially conceived as a fragment… 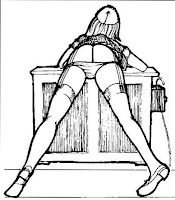 ...and as I have said before, hospitals aren't very secluded places, and neither are the staff's own rooms particularly private, so carrying on my disciplinary activities is restricted to some extent by the need to keep noise, particularly in the residences, to an absolutely minimum.

My own two rooms are situated at the end of a block, so at least I have only one immediate neighbour to worry about, but I still have to be careful not to draw attention to my 'goings on'. 'Goings on,' by the way, are more prevalent than may be supposed, particularly between the student nurses and those members of staff whose job it is to instruct them, so people tend to turn a blind eye to the odd student who may happen to be seen in the corridors of the senior staffs' residences.

Having to contend with this somewhat limiting situation, I have had to refine my methods accordingly, and surprisingly though it may seem, I have found that caning a girl, though potentially more audible than other methods of punishment, can nevertheless be managed with very little noise, provided the caning is administered in the right way.

The girl having arrived, I take her through to my bedroom, which is furthest from the corridors, draw the curtains and switch on the radio, not so loudly as to draw attention but enough to blend with the sound of the cane as it lands. Something rhythmic is, of course, best.

The girl then undresses, or at least takes off her skirt or jeans if she isn't in uniform, and I have her place herself in an appropriate position either on or across the bed. I find that having her in a kneeling position, while admirable from the accessibility point of view, unfortunately allows of too much movement once the cane starts its work and her bottom tries to wriggle out of the way, so unless I know she is going to be particularly obedient, I prefer to have her on her tummy, and propped up with pillows under her hips. I take her knickers off, rather than simply down, and give her another pillow upon which to rest her head. Not out of consideration, I might say, but simply because if she's going to blubber, I'd rather she had the pillow to cry into and muffle her weeping instead of letting everyone know what a baby she is. I then place a low stool between her out-stretched legs, about as far up as her knees, which will help to remind her to keep her legs apart while I'm dealing with her. I can then begin her caning.

My personal opinion regarding any kind of corporal punishment, is that it is unlikely to be effective unless the girl is sufficiently well whipped as to shed some genuine tears. At the same time, in my particular situation, I can't be too determined when it comes to laying on the cane, because I can't have the girl yelling at the top of her voice after the first couple of strokes. So I have developed a method which, while avoiding dramatic scenes, does achieve the necessary effect all the same.

Having warned the girl of the need for quiet as far as possible, I start to punish her. I never specify the number of strokes, as according to my philosophy it is somewhat irrelevant, the main object being the chastisement of the girl until, by her tears, she places herself in a position of submission to my authority.

I cane lightly at first, with perhaps five seconds between strokes, keeping each stroke across the heavy swell at the base of her buttocks, and in a band some four inches wide. The cane against her bare flesh makes little more than a plopping noise at this stage, and I give her at least a couple of dozen of these fairly light strokes to introduce the sting gradually and evenly. Her bottom slowly turns red across the plump, receptive part of the cheeks, and then, little by little, I increase the weight of the strokes until I see the beginnings of the reaction I'm looking for. This is usually a series of quick little jerks or jolts of the cheeks as the cane lands, or it may be a slowly increasing wriggle of her hips as she lies across the bed.

Having found this point, I then know that the sting is beginning to take hold, and I keep the strokes at roughly the same weight for perhaps two or three dozen more. Faint lines begin to appear across the reddening cheeks, and pretty soon she'll begin to give little gasps and occasional 'Ooooh's' and 'Ahh's' in time with the wriggling of her bottom.

I then caution her again, reminding her that I will not tolerate any unnecessary noise, and then gradually increase the strength of the strokes and slow down the rhythm, so that I reach a point where, though not yet actually crying, she is all the same quite near to tears, and her bottom is beginning to twitch with anticipation and snatch away from the cane each time it lands squarely across her sore buttocks.

This point in the caning is, of course, the most delightful and is the crucial stage of the punishment. Two or three good hard whacks would immediately precipitate the onset of tears, and would have her yelling lustily, and yet, by judging the power of the strokes, and slowing down here and there to give her a chance to regain her breath, this exquisite balance can be maintained for minutes on end, with her bottom squirming around and perhaps even trembling, and her gasped protests becoming ever more poignant, until, slowly and inevitably her quiet sobs turn to tears, and she'll have let go the last vestiges of her dignity and self-control.

This is not the point at which you should stop, but neither should you take unfair advantage of the situation. Having reached this stage she has utterly submitted herself to you. How you deal with her from here on will have a lasting effect on her respect for you and your authority.

For myself, having induced her tears, I would remind her of the reasons why she is being punished, and then, without any increase in the severity, I would give her about another dozen, in the same way as before, and would judge precisely when to stop by the effect it has on her. The last dozen or so would be slow and methodical, waiting for her bottom to stop its more energetic wriggles before each stroke, not speaking to her and not responding to any pleas or promises.

The climatic signs will be obvious as she nears the point of losing control, and when you judge the moment to be right, the punishment should end.

So much for caning and keeping it quite. Another interesting way I have of disciplining the girls is...
Posted by Dmitry at 23:10