Mother And Daughter - the story from Blushes

Tuesday, 19th of April. The clock in the Rover dashboard indicated 3.55. Elizabeth Mayfield reached to turn down the vanity mirror. Her face with the big violet eyes registered anxiety. She pursed full, red-lipsticked lips. Not looking at her husband she said, 'He's...so big.' Her voice low in wonderment — and fear. 'Enormous. Fiona...' Turning now to Derek. 'I can't bear to think. We should never have agreed.'

Derek Mayfield's eyes remained fixed on the road. The road leading away from Greentops Finishing School and its principal, Mr Philip Branton MA. Who was a very big man. Unemotionally he said, 'We didn't have a lot of choice, did we? Unless we wanted her kicked out. It'll probably do her good.'

'How can you be so callous.' Elizabeth squirmed her bottom on the car seat. Almost as if she could feel the cane across her own substantial but shapely hindquarters. 'He could kill her,' she breathed. 'He must be.... 20 stone at least.'

Derek's eyes remained to the front as he pictured Philip Branton. He blinked. 'Size is not a lot to do with it. A 10-stone weakling if he set his mind to it could certainly have a girl howling for mercy. And could no doubt also make quite a mess of her bottom. Branton won't be hitting with full force or anything like it. No one does.'

'It's all right for you. You won't be getting it. That poor girl.'

Derek gave her a quick look. A smile. 'Nor will you. I thought he was all right. I don't think he'll really hurt her. And it should make her stop and think. Would you want her coming home pregnant?'

Elizabeth said, 'Don't be disgusting.' The dashboard clock now said exactly 4.00. They were some 35 miles from Greentops Fishing School. Where the clock on Philip Branton's mantlepiece registered 4.04.

His clock was always slightly fast. Which frequently made a girl start when she glanced at it, imagining that she was late for her appointment. Mr Branton was a stickler for punctuality. It was in fact exactly 4 o'clock as his door opened to admit a nervous looking Fiona Mayfield. Exactly on time in spite of a last minute dash to the loo. A frenzied yanking down of her freshly clean white knickers and then perching her bottom on the seat. She felt desperate to pee but there was only a little trickle tinkling into the bowl. Nerves. Desperate, stomach-clenching nerves. She wiped herself and grabbed up her pants. Fresh clean ones taken 20 minutes ago from her drawer. A girl wanted clean knickers on if Mr Branton was going to.... Oh Christ! Closing his door quietly behind her. Oh Christ. She wanted to go back to the loo again, though of course nothing would come. But if she said 'Sir, I need to go to the loo' it would at least postpone matters for perhaps five minutes. But Mr Branton would not be pleased. And right now, of all times, was not the time to annoy Mr Branton. She came to an uncertain stop in front of his desk. 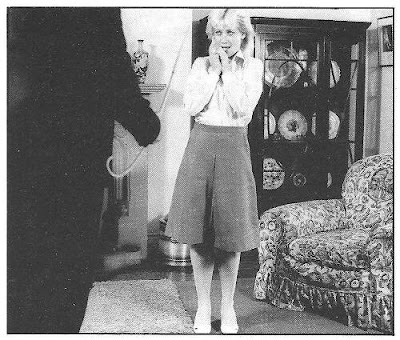 Philip Branton looked up from his papers. A very pretty girl, blonde, like her mother. A nice shape too, in the demure white blouse and grey skirt with white heels and stockings which comprised the more formal wear for girls at Greentops Finishing School. Slimmer than her mother of course who in her 39 years (worked out from data on Fiona's application form) had put on just a little weight. In the right places, though. Yes. But Fiona...

'As you will know, Fiona, I have had your parents here earlier this afternoon. That is always my practice, when I intend to cane a girl.'

A pause. To let that word sink in. Cane. Fiona opened her mouth. Clenched even white teeth. Closed her mouth again. A soft, vulnerable mouth that would shortly be opening in agony. A pink flush colouring her cheeks. Quite possibly, he thought, there might also be that sudden urge to visit the bathroom.

'Yes. Charming people. And your mother a very attractive woman.' Mr Branton leant forward slightly. 'I can tell you that they raised no objection. They agreed with me that a caning was very much in order. And certainly better than being expelled, as I am sure you will agree.'

Fiona didn't necessarily agree with that; being expelled might well be preferable. But she knew her parents wouldn't think that. Oh no. She had to take her medicine. Mr Branton was getting up. That heavy bulk that when you first saw him rather took your breath away. And you thought, wondered, hotly, fleetingly at least, what it would be like with such a bulk on top of you. If you were married or something. Not that Mr Branton was married. Though some girls said, whispered...

But Fiona wasn't thinking about that now. There was this other awful business. The reason why she had been summoned here at 4 o'clock. Mr Branton now round his desk and close, looming over her. His large hand taking hold of her arm.

'They agreed with me, Fiona, that a girl cannot be allowed to make liaisons with local youths. There is the moral aspect as well as the real possibility of extreme social embarrassment. Your dear mother would not be at all happy to find her daughter swelling up with an unwanted offspring. You can appreciate that I should have thought.'

'That is a matter we can check of course. But what I am anyway concerned about is that the rule was broken. If one girl gets away with it all the others will think they can follow. That is why I am going to cane you. Now, have I caned you before?'

A rhetorical question. If he had Philip Branton would certainly have remembered. A gasped 'No!' from the shaking girl.

'Then the way I want you is kneeling up on the armchair. Facing the back. With your skirt raised to your waist. And of course your knickers down.'

His hand gripping Fiona's arm turned her towards the chair. The one incidentally in which her mother had been seated earlier that afternoon. A wailing groan from Fiona. It was happening. The reality of it now. She had tried not to think about it but couldn't help wondering. How it would be. Girls who had been caned didn't like to talk about it. Naturally. So you didn't know the details. Didn't really want to. Not until...

A brusque smack to her bottom. 'Get up, girl. Or you'll get it in a way you won't like. Upside down on the table.' 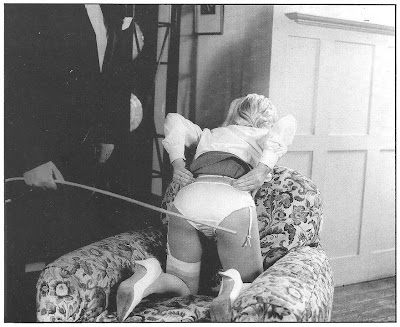 She climbed up, not daring to think what he meant. Kneeling on the seat. 'Open your knees,' from Mr Branton. And pulling her skirt up round her waist. A splendid sight. The virginal whiteness of knickers tight over youthful curves and roundnesses. The slim lines of white suspender straps gripping the tops of white stockings which themselves gripped the soft fullness of pale thighs at middle height. A young lady in her burgeoning prime. A delectable sight. A young lady also in some distress. Gaspy heavy breathing. Anticipation is a nerve-wracking thing. 'The knickers,' said Mr Branton's somewhat gravelly voice. 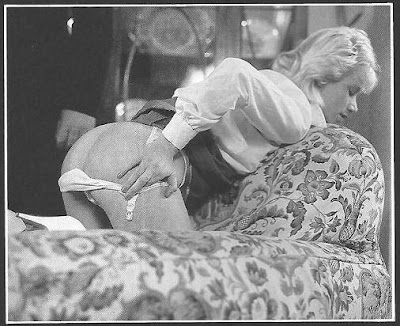 'Knees a bit wider,' advised the principal. 'And bend forward. Then place your hands in between your legs. Just below the knickers.' 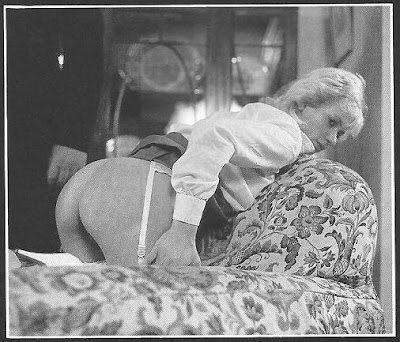 Hmmm. Not a true blonde apparently. Not if what he could now see was anything to go by. For the position Fiona had reluctantly assumed was extremely revealing. The whole of a girl's business on display, and the bush of hair was dark brunette in contrast to the shining blonde of her head. Hmmm.

Mr Brantpn's hand. Suddenly there. His other hand in the small of her back anticipating perhaps that she might try to spring up. 'Keep still. I said we can check.' 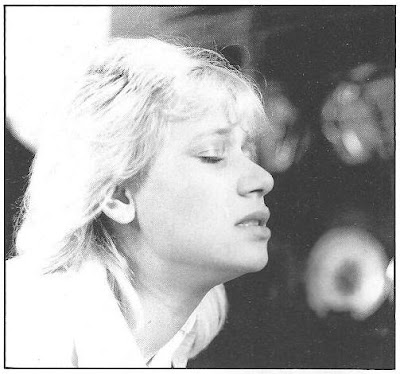 He had let go of her. That shocking intrusion.... Fiona could still feel it although Mr Branton's hand was no longer there. Beads of sweat on her lip. How could he? It... 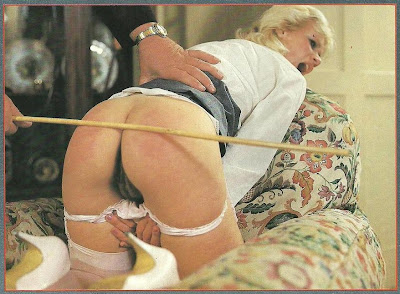 The cane. Oh God, the cane. 'Nooo....!' A mind-bursting pain across the crests of Fiona's firm buttocks. 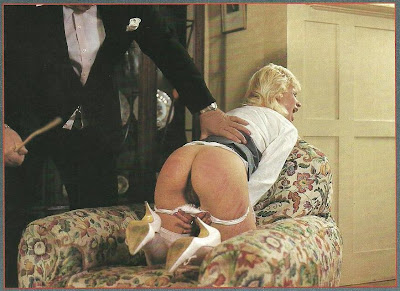 No! She couldn't. Gasping for breath. Her poor bottom on fire. Hot tears starting from the big blue eyes that were not quite as violet as her mothers. 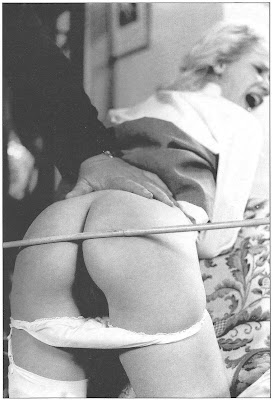 'Did he say she was going to get it this afternoon?' wondered a fraught Elizabeth Mayfield. As the scream rang out some 50 miles away.

'I can't remember. Stop worrying.' Derek Mayfield's hand came down onto his wife's nyloned knee. 'Didn't you ever get it? When you were at school?'

Behind the violet eyes Elizabeth's mind focussed on things. Both recent and more distant. She hesitated, then: 'Yes.'

The hand slid up, pushing her skirt in front of it. To Elizabeth's bare upper thighs. 'You never told me,' he said. 'When? Where? Who?'

Elizabeth grabbed at his hand. 'Stop it. At my school. My finishing school. Like Fiona. Why, does it excite you? He really beat me if you want to know.'

She could still remember it all right. A vivid, clear memory. That was why when Mr Branton had phoned about Fiona...

Thursday, 14th of April. Mr Branton's mantlepiece clock showing 3.15 when Elizabeth had breathlessly entered his sitting room. A visit she had kept to herself, saying nothing to Derek or indeed to Fiona. A visit to plead with Philip Branton. A woman of maturer years but still stunning. A beautiful blonde come to plead; to throw herself on his mercy for the sake of her daughter.

But Philip Branton, though quite clearly not unresponsive to Elizabeth Mayfield's charms, had remained adamant regarding the caning.

In his sitting room now (Tuesday the 19th), with 4.25 showing on his clock, the sixth and final scream had just pierced the air. The scream came on top of gasping sobs. Four, five and six had, if anything, been harder than the first three. It was essential that a girl be made to feel it. That was after all the whole purpose of a caning. 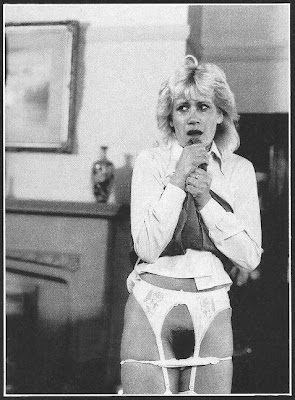 She stood, gasping and sobbing. On the pretty legs that didn't seem to want to support her. Mr Branton delivering his post-caning lecture. Observing as he did so that striking contrast between what was below and what was on top. Elizabeth Mayfield, of course, had been just the same in that regard.

In the Rover Elizabeth said, 'It was the caretaker. He found out I was seeing this boy. I wasn't doing a lot but it was strictly against the rules. So... I let him do what he wanted. Cane me. On the bare bottom. Does that excite you?'

'Yes.' Derek's hand pushed back in between her thighs. 'You never told me.'

Elizabeth pursed her lips. She was thinking of the principal of Greentops School again. 'He's so big,' she breathed in the awe-filled voice.

Was Elizabeth Mayfield referring to Mr Branton's general bulk and the thought of his cane whipping down across poor Fiona's bottom? Or something else? That she herself had experienced. On Thursday of last week. Face down in the seat of that armchair.
Posted by Dmitry at 08:54