By appointment.
by Andrew Grantham 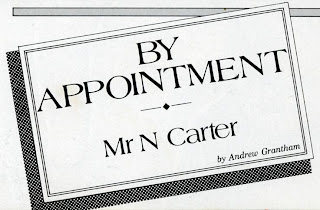 THE DOOR was opened by a very attractive young woman. Her long, paprika-coloured hair brushed her shoulders. She looked at the man with her big, green eyes.

'My name is Carter,' he announced slowly. 'I have an appointment.'

His eyes travelled down her body. Her white top was flat against her chest, indicating that she had little in the way of breastworks. Her hips however, straining her dark skirt, were wide and full. Her legs were bare, sturdy yet shapely, teetering on her red high-heeled shoes.

'We'll go in the lounge,' she said softly. Neil walked behind her, admiring the swing of her curvaceous hips under the tight skirt.

The visitor ran a very unusual business. He caned women for a living! Sometimes he strapped them. Sometimes he spanked them; but mostly he caned them.

Why did men want a complete stranger to chastise their womenfolk? He had found that some males could not bring themselves to administer CP. Some thought an outsider heightened the humiliation. Some men, like the seafaring husband of Pamela Martland, wanted the woman in their life attended to before they returned home.

Neil set his bag down on the rich, thickly-patterned carpet. 'Is anyone in next door?' he enquired.

'In case they hear anything,' he smiled grimly.

The pretty young woman swallowed hard. 'Would you like to come upstairs?' she asked. 'You know what for.'

'I know what for,' he told her. 'Tempting though the offer is, I must decline.'

'Strip off please,' he asked her, reaching down to his bag.

'Everything?' she cried, her eyes widening even further.

'Yes, everything,' he told her sternly.

She began to pull her top up over her head. Neil rummaged through the various implements in his bag before coming out with a thin, whippy cane. When he looked up, the woman was clad in only a pair of white panties and her red shoes. Her eyes were instantly transfixed on the cane.

Neil's own eyes lingered on her small, pointy breasts. Her skin was creamy-white with a sprinkling of freckles. Her thighs were full and fleshy.

'Remove your knickers and lie over the settee arm with your bottom poked up nice and high,' he instructed.

She hesitated, but when Neil swished the cane she immediately put her thumbs in the top of her knickers and then skinned them down.

Neil feasted his eyes discreetly on her pubic bush of red-gold fur.

She stood upright, tossed her knickers to one side and walked over to the settee.

Neil admired her round, chubby bottom. The slender rod would embed itself in the flesh and then spring back, leaving its tell-tale mark.

She took a deep breath and draped her body over the padded arm. Not quite satisfied, Neil put a cushion under her tummy.

'That's better,' he said softly. Then he shuffled his feet into position, and placed the cane across the crown of her bum. She flinched as the springy instrument touched her trembling flesh.

Unhurriedly and using the full force of his arm, he began to flay the plump buttocks so helplessly presented.

She let out a strident howl as stinging pain flashed to the terminal points of her brain. Now she knew why Neil had asked about next door!

'Keep still!' ordered Neil, reaching out a hand to steady her wriggling bottom.

'That thing hurts!' she complained.

'That's the whole object of bamboo retribution,' he reminded her.

He raised his arm and then brought it down sharply. The swish was followed by a howl as the cane bit into the rich moons. In between these sounds came the unforgettable punctuation of the crack! Her legs waved in the air and she pounded the cushions of the settee with her fists.

'Oh God!' she gasped. 'I had no idea it was as bad as this.' Her voice was distorted by her suffering.

Her chubby bum-cheeks were violently squirming, bucking and contracting in a quite ridiculous performance. Neil thoroughly enjoyed the sight of her tortured nates humping up and down.

Quickly, he sliced the cane into her flesh once more, its arc a lightning flash.

'Yoweeagh!' yelled out the pretty victim as she felt the thin strip searing into her skin like a branding iron.

The third imprint sprang up across both sides of the long, deep cleft between her large globes.

Neil swung his arm again, the bamboo whipping, biting into the fleshy mounds.

'Aaghaghaagghh!' she shrieked. Each cry now was more agonised than the one which had preceded it.

Her head thrashed to and fro as her bum throbbed with burning pain.

Neil didn't wait for the sting and the throb to subside. He laid into her quivering bum cheeks for the fifth time. CRACK!

The young woman's shrill reaction was enough to waken the dead. She raised herself up, her body shaking violently and her small breasts bouncing about.

The final stroke was delivered with all his force. It landed devastatingly across the existing ridges.

She went wild. The cane had inflicted a literally intolerable stinging upon her scorched globes.

Neil left her writhing and groaning as he put his rapier-thin rod away. 'I'll see myself out,' he told her. 'There's no need to get up.'

The redhead stood with the palms of her hands seemingly glued to her burning bum-cheeks, her whole body churning on the spot. Suddenly, into the lounge strode a strikingly pretty, dark-haired young woman.

'It was awful, Pamela,' gasped the redhead. 'Please don't ask me to stand in for you again.'

'Oh Ginny,' cried Pamela, taking her neighbour's hands away from her tortured behind. 'Your poor bottom's in an awful state!'

'It's how yours should be looking,' Ginny sobbingly reminded her friend.

Neil sat in his car, looking at the photograph which had been enclosed with Mr Martland's instructions.

Pamela Martland was a brunette. The woman who had passed herself off as the seafarer's wife had been a redhead.

Neil would wait a moment or two before knocking again on the Martlands' door.

Pamela had already earned herself four penalty strokes – and her knickers hadn't even come off yet! 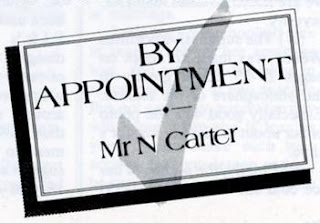