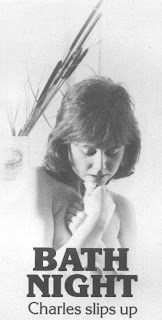 'Wendy?' Charles' voice outside the door made Wendy start – his face appearing in the half-open doorway made her drop the soap into the water and stand with her hands across her body while he eyed her soap-streaked shape up and down. 'Haven't you finished yet?'

'Er – yes. I won't be a minute.' She plopped down into the bath and rinsed the water over her, not looking back over her shoulder but knowing that he was still there, watching. Suddenly he was there beside her, a towel in his hands.

'Come on.' He held out the towel towards her, not giving it to her – more inviting her to come and get it. Ashamed of her nakedness – she still hadn't got used to being completely undressed in front of him – she had no option but to stand up in the bath. Water streamed down her breasts and belly, running down her legs and arms, naked and shiny in the overhead light.

He withdrew the towel and leaned forward to pull out the plug, then, while the water drained away, he helped Wendy to dry herself, nowhere being too personal a place for his attention, the blush on Wendy's fresh pink face simply added encouragement to him.

'Turn round.' Her bottom, damp and smooth-skinned, glowed warm red from it's immersion in the hot water so soon after it had been spanked. Finger marks showed individually here and there as the towel brisked roughly over her buttocks, bouncing her cheeks and pinkening the tops of her thighs with it's coarseness. Wendy panted little protests at the thoroughness of the towel's attentions, but to no effect. Her body – and especially her bottom – was tingling all over by the time she was dry.

Talcum powder was sprinkled liberally everywhere, especially in those little places where there might still be a trace of dampness, like in between the division of her chubby bum-cheeks. At last he tossed the towel onto a chair and went out to the linen cupboard on the landing. He returned with a vest – nothing else.

'We'll have tea and toast downstairs,' he said. 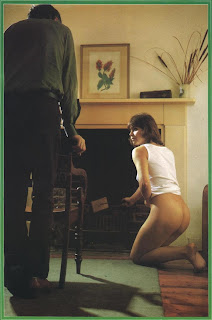 Wendy dressed herself – it took only a moment, there being only the vest. Tea and toast was a ritual every Sunday now that Tracey had been sent back to the training camp – Wendy would kneel before the log fire, which she would have made up earlier, while he went to make the – oh dear! Suddenly she remembered that she hadn't made up the fire!

She scampered downstairs, past the kitchen where he was busy with the kettle, and ducked into the living room. The fire was almost out! Frantically she knelt down and fanned at the few remaining sparks with a newspaper. Nothing much happened. Putting her face close to the grate she blew, hard, and then sat back on her heels spluttering. Black specks of ash were whirling in the air and had already settled on her vest and her arms, and on her legs.

She skewered a piece of bread and held it to the fire on the toasting prong while she tried again with the newspaper. More smuts flew around, but that was all. More logs would hardly be the answer; she stuffed the newspaper into the glowing ashes and it caught immediately, but there was no more paper and hardly any time left anyway! Out in the hall she heard his footsteps, and the clink of china on a tray. Panicking, Wendy thrust the bread towards the dying flames from the burning paper, knowing it was hopeless, knowing that he would relish any reason to give her another spanking, if not worse, and this he would call negligence, in his book almost the very worst of crimes!

For several minutes he stood there behind her, watching as the flames died, while Wendy could think of nothing else to do but stay there on her knees with the bread thrust towards the fire, waiting for the inevitable outburst.

When it came it was less an outburst than an ominously quiet intimation that there was going to be more to bedtime tonight than a pat on the bottom and a peck on the cheek.

'You've made your vest filthy, Wendy. Take it off.' 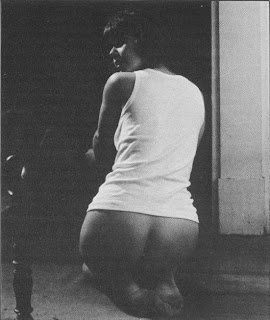 Wendy put down the poker and did as she was told, her breasts bobbing as the vest slipped up to her neck before she pulled it off. She brushed her hair back out of her eyes and looked nervously back over her shoulder.

'And you've got smuts on your face – all over yourself, in fact.' He looked down at her in the way that he did when he'd thought of something entertaining to do with her. 'You'll have to have another bath, my girl, that's what you'll have to have!' He pointed theatrically towards the door. 'Come on – upstairs!'

Clutching her vest to her body, Wendy slipped sideways past him, keeping well out of reach, and then darted for the door.

It took five minutes to run the bath; five minutes in which Wendy's already spanked bottom got another dose of the same treatment, hoisted across his lap while he sat on the bathroom chair with steam rising all around and condensing on her bare, upturned bum-cheeks, making the slaps sting more on the dampness and prompting Wendy to lively and voluable response!

Weeping miserably, she was made to stand up in the bath while she was soaped from the top of her forehead to her knees, her thighs squeezing together as the soap was slipped in between and then lathered by hands which didn't hold back for the sake of her modesty. Each little squeal of surprise or complaint brought a swift spank on the bottom or legs, making flecks of soap fly everywhere and doing nothing to diminish the girl's tearfulness. Even through the lather, her bum's freshly punished crimson glowed brilliantly, and with more slaps arriving every few seconds she was trying desperately to keep her eye on the spanking hand and letting the other one slip through her defences to make her squeal some more. 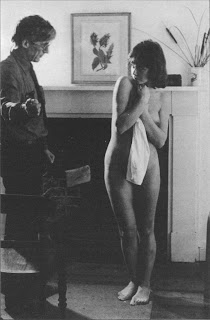 'Right – now get another towel and dry yourself. I'll deal with you properly in your bedroom!'

It was a flushed-faced and blushing-bottomed girl who tip-toed along to her room a few minutes later, to find her pillow plumped up on the end of the bed and the cane laid ominously across it. Wendy knew well enough what she was expected to do – and what she was in for now!

By the time Charles had come upstairs again. Wendy had spread-eagled herself across the end of her bed, her tummy on the pillow, her toes on the floor, her legs straight, her hands stretched forward and out on either side to clasp the bedclothes. The cane which she had left on the bedspread beside her, whispered against the candlewick as Charles picked it up, and then it's cool length was laid teasingly across both reddened bum-cheeks, patting and bouncing against the firm flesh of the plumped-out buttocks, making them quiver and squeeze together in anticipation of the caning to come.

And come it did; six strokes, hard and painful, all over in two minutes but in that short time Wendy had been transformed from a nervous, expectant girl into a blubbering child, wriggling against the rumpled bed with her hands clutching at her bottom while she sobbed out her distress into the bedclothes. Left across her bed to cry out her tears, Charles tucked the cane pompously under his arm and left, returning a moment later to say 'Get into bed. I'll be back.' 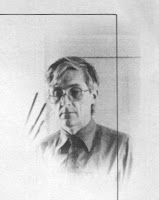 For thirty minutes or longer, Wendy lay quiet as a mouse under the bedclothes, listening to him walking around downstairs, jumping every time she thought she heard him pacing along the hall to come up to her room. Under the blankets she was still naked, knowing that was how he would expect to find her. When he did return he had the cane in his hand again: overcome by fright Wendy burst into tears and hid her head under the sheet, but the blankets were whisked away and she was hauled out of bed, sobbing as she was made to walk in front of him along the upper landing, her bottom flicked by the cane at every second step. Skittering away to either side, crying loudly at the fresh smart being kindled in her bum, he piloted her into the big bedroom at the end of the house which was almost never used.

The bed was huge, with posts at each corner which supported a canopy of pink silk. It was old-fashioned and high off the floor; standing with her thighs against it, before she was pushed forward and made to topple across it, the matress was on a level with the tops of Wendy's legs. It made a perfect, almost waist-high platform for a caning.

The six cane strokes Wendy had already been given were faintly-raised ridges across the crowns of her cheeks, closely grouped yet not overlapped. The six she was now given were aimed lower down, up under the outswell of her buttocks, and were so painful that her hands had to be held in the small of her back so that her struggles should not interfere with this second installment of her caning. The six strokes left her wriggling against the bed, her crying leaving her too breathless to protest when some cooling cream was produced from a chest of drawers and smoothed none too gently around the plump curves of her bum, between the thighs being just as important a place, apparently, as anywhere else, the slippery fingers finding places that you wouldn't have thought would need creaming in the ordinary way, except that by now Wendy didn't need to be told that this wasn't anything to do with what ordinarily happened.

It began gently enough – a slippery probing, a careful dilation, while Wendy's eyes widened in aprehension. Her nervous wriggles were ignored – her legs were eased apart and kept there by the pressure of his legs against the insides of her's; her hips were tilted up to the required angle by his hands under her belly, and then the filling-up feeling, inch by careful inch, the widening, the coaxing the understanding finger slipped somehow down between her thighs so as to touch a tender, titilating spot.

Wendy's hands began to reach backwards, groping, flustering, protesting mutely, while the invasion continued and became a coming and going, a thrusting and a pushing, while thoughtless hands wandered lasciviously over her up-tilted bum, careless of the cane-marks, even seeming to seek them out deliberately.

Wendy's tears now seemed less frantic, prompted no longer by pain or even fear so much as by the emotional aspects of what was happening to her. Despite herself she began to respond to the rhythm, lifting a little, rising up to meet him at every push. Charles' discretion intervened at the last moment; slipping backwards he allowed the benediction to fall in warm splatters over the girl's crimson bottom, seeing her shiver at the unexpected sensation.

Silly though it was, of course, Wendy found herself in the bath for the third time that evening – well, she couldn't go to bed like that, could she – and she was asleep in bed, on her tummy, by the time Charles found that there wasn't any hot water for him. Wendy, presumably, would not have been in the least sympathetic even had she known, which she didn't. She'd heard as much as she wanted to hear about bathtime for one day.
Posted by Dmitry at 23:38